Britain at ‘perilous turning point’ as new restrictions rolled out

British prime minister Boris Johnson has announced that new restrictions designed to curb the spread of Covid-19, including shutting pubs at 10pm and a maximum wedding attendance of 15 people, could last for six months. Video: UK Parliament TV 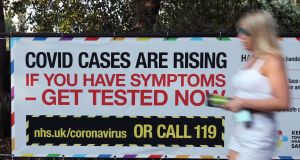 In a major reversal of government policy, British prime minister Boris Johnson has urged all who can work from home to do so. Photograph: Yui Mok/PA

Boris Johnson has announced a six-month tightening of coronavirus restrictions, telling MPs that Britain was at a “perilous turning point” as infections rise and warning that tougher measures could follow.

The restrictions mean pubs and restaurants must close at 10pm from Thursday and will be restricted to table service, only 15 guests will be allowed to attend weddings from next Monday and a planned return of spectators to sports venues from next month will not go ahead.

In a major reversal of government policy, Mr Johnson urged all who can work from home to do so. Only a month ago, ministers were telling workers to return to the office in order to support retail and hospitality in city centres.

Fines for failing to wear a face covering and breaching social distancing rules will double and the military could take over some police duties such as guarding public buildings to free up manpower to enforce the rules.

“I must emphasise that if all our actions fail to bring the R below 1, we reserve the right to deploy greater firepower with significantly greater restrictions. I fervently want to avoid taking this step, as do the devolved administrations, but we will only be able to avoid it if our new measures work and our behaviour changes,” the prime minister said.

“For the time being, the virus is a fact of our lives, and I must tell the House and the country that our fight against it will continue. We will not listen to those who say, ‘Let the virus rip’, nor to those who urge a permanent lockdown. We are taking decisive and appropriate steps to balance saving lives with protecting jobs and livelihoods.”

Scotland’s first minister Nicola Sturgeon said in Holyrood that her medical and scientific advisers believed the measures being introduced in London were inadequate. Scotland will follow Northern Ireland in banning separate households from visiting one another in their homes, as well as adopting the measures Mr Johnson announced on Tuesday.

Ms Sturgeon said that by acting earlier and more substantially, Scotland could be in a position to lift the restrictions earlier than in six months.

Labour leader Keir Starmer offered his party’s support for the measures Mr Johnson announced but said the government must reconsider its decision to end the furlough scheme next month. He criticised the prime minister’s failure to heed warnings about the inadequacy of Britain’s testing and tracing system.

“They pretended there was not a problem. They did not act quickly enough, and now the testing system is not working, just when we need it,” he said.

Labour’s Ben Bradshaw asked the prime minister if he thought the much lower level of infections in Germany and Italy was due to those two countries having locally run test and trace systems that work.

“No, I don’t, and I think the continual attacks on local test and trace and what NHS Test and Trace has done are undermining and unnecessary,” Mr Johnson said.

“Actually, there is an important difference between our country and many other countries around the world: our country is a freedom-loving country. If we look at the history of this country over the past 300 years, virtually every advance, from free speech to democracy, has come from this country. It is very difficult to ask the British population uniformly to obey guidelines in the way that is necessary.”

A number of Conservative MPs expressed misgivings about the new restrictions, calling for MPs to have a vote before any further measures are introduced.

Caroline Fairbairn, director general of the Confederation of British Industry, said the government’s call for people to work from home would deal a “crushing blow” to many businesses in city centres.