New report asserts that a no-deal exit will cost Britain £2,400 per person 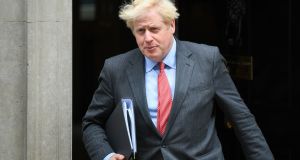 Boris Johnson departs from 10 Downing Street, on Tuesday. The economic cost for the UK of a no-deal Brexit could be two or three times as bad as the impact of Covid-19, a report has concluded. Photograph: Chris J Ratcliffe/Bloomberg

The economic cost for the UK of a no-deal Brexit could be two or three times as bad as the impact of Covid-19, a report has concluded.

Analysis by the London School of Economics (LSE) and the UK in a Changing Europe initiative says “a no-deal Brexit would represent a further major shock to a UK economy”.

“Our modelling with LSE of the impact of a no-deal Brexit suggests that the total cost to the UK economy over the longer term will be two to three times as large as that implied by the Bank of England’s forecast for the impact of Covid-19,” says the report.

LSE modelling puts the long-term economic hit from a no-deal Brexit at 8 per cent of GDP, which is similar to the UK government’s own forecast in 2018 in this regard of 7.6 per cent, which amounts to £160 billion (about €175 billion) in today’s money, or £2,400 per person.

This compares with the Bank of England’s latest forecast of the impact of Covid-19 which shows a reduction of 1.7 per cent of GDP to the economy up to 2022.

This amounts to £40 billion, or £600 per person, and is dwarfed by the cost of a no-deal Brexit, which will have an impact on GDP for years to come.

“In the long run, Brexit is likely to be more significant”, depressing the country’s economic output over 20 years, says the report, titled “What would no deal mean?”

In the short term it is “almost certainly correct” that “the economic impacts of Covid-19 dwarf those of Brexit”, it says, as not even the most pessimistic forecasts suggest the initial fall in output caused by a no-deal Brexit could lead to a downturn like that seen in the second quarter of this year.

But it concludes that there will be longer-term damage from a no-deal Brexit to the country’s reputation for ease of doing businesses, with delays due to administrative burdens at ports, constraints on travel and tourism, as well as curbs on immigration and free movement of labour.

Economists have talked of V-shaped, W-shaped and K-shaped recoveries from Covid-19, but a no-deal Brexit will make it “harder for the UK to ‘grow its way out of trouble’,” the report says.

The authors of the report say the risk is that “EU-based businesses will seek to avoid exposing themselves to UK suppliers, and that multinationals will seek to minimise the degree to which trade crosses the new border”.

They add that the deal being discussed is low on ambition and “relatively thin”, leading to their conclusion that this will not be the end of discussions with the EU. “No deal or the thin deal on offer are both likely to be unsustainable endpoints,” they say. – Guardian