Strong and stable? All eyes on May and Hammond’s chemistry 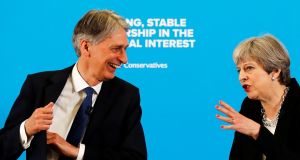 Chancellor Philip Hammond with British prime minister Theresa May at a press conference in Canary Wharf, London on Wednesday. May refused to confirm that Hammond would remain as chancellor after the election. Photograph: Stefan Wermuth/Reuters

Theresa May and her chancellor Philip Hammond came to Canary Wharf on Wednesday morning to give Jeremy Corbyn his daily kicking. But nobody was interested in their 16-page dossier about the cost of Labour’s manifesto promises. What the press wanted to know was how May and Hammond felt about one another.

A couple of hours earlier, the chancellor had failed to deny reports that he had sworn at May’s joint chief of staff Nick Timothy during angry rows with her team. Hammond said he “did not recognise” the story, which he dismissed as “media tittle-tattle”.

So after May delivered her prepared remarks about Corbyn at Canary Wharf, she was asked if Hammond would remain as chancellor if she wins the election next month. Faced with an opportunity to endorse her chancellor and shut down speculation about a rift, she walked away from it.

“I think it’s true to say that the chancellor and I, and every other member of my team, are focused on June 8th. Our focus is on winning this general election because it matters” she said.

Hammond sought to play down the reports of his swearing, suggesting that although he swore at his family, he was not always so foul-mouthed when dealing with May’s advisers. And he pointed out that he and May are the oldest friends.

By now, with Corbyn and his manifesto a dimming memory, almost every question was about whether May would endorse Hammond as chancellor. On the third attempt, she did – although she didn’t promise he would keep his job.

“As Philip says, we have worked together over the years, for many years. Longer than we would care to identify.”

May and Hammond have indeed known each other a long time. They were contemporaries at Oxford in the 1970s, both entered parliament in 1997 and they served together in David Cameron’s cabinet. But their relationship as prime minister and chancellor is not remotely as close as Cameron’s with George Osborne, even if it is nowhere near as toxic as that of Tony Blair and Gordon Brown.

May’s team briefed against Hammond after the budget last March when a Conservative backbench revolt forced him to withdraw a proposal to increase some national insurance contributions. More recently, he and Timothy are said to have clashed over the Conservative manifesto, with Hammond resisting an expansion of the state’s role in the economy.

May’s refusal to confirm that Hammond will return as chancellor after the election may simply reflect the innate caution which is part of her political make-up. But in a campaign which is built almost exclusively around her, it was also a sign of the prime minister’s swelling dominance over her own party.