Analysis: Revelations over last 24 hours may bring 45th US presidency into new territory

President Donald Trump asked then-FBI Director James Comey to shut down an investigation into ties between former White House national security adviser Michael Flynn and Russia, an associate of Comey, who has seen the memo, has said. Video: REUTERS 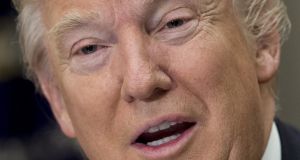 In the relentless real-life drama of the Trump presidency there have been many points at which it seemed the president has crossed a red line.

Perhaps it was his audacious travel ban that was subsequently halted by several federal courts, or his criticism of “so-called judges” and description of CIA agents as Nazis.

The mysterious dismissal of his national security advisor Mike Flynn and his subsequent firing of the FBI director James Comey are also in contention.

But it is two sets of revelations over the last 24 hours – that the US president shared classified information with Russia and that he ordered former FBI chief James Comey to halt its investigation into Mike Flynn, which has been denied by the White House, that may bring the 45th US presidency into new territory.

The word impeachment is in the air in Washington as talk turns to whether the US president could be removed. The dollar fell in early morning trade in Asia amid concerns about the latest revelations.

So what are the options to initiate the ejection of Donald Trump?

The 25th amendment to the US constitution

Inserted into the constitution in 1967, this amendment deals with succession to the presidency, stating that the vice president will become president if the sitting president resigns or dies in office.

“Section Four outlines the procedure for removing the president “if the president is unable to discharge the powers and duties of his office.”

Critically this can only be achieved if the vice president or a majority of the cabinet moves against him, or if an independent panel - such as a medical council - decides.

If the president contests the decision to remove him, Congress ultimately decides.

Only two presidents have been impeached – Andrew Johnson and Bill Clinton (Richard Nixon technically resigned before the House voted to begin impeachment proceedings).

The Constitution states presidents can be removed from office on conviction of “treason, bribery, or other high crimes and misdemeanors.”

The definition is notoriously vague – essentially it is up to Congress to interpret it. Crucially the only previous impeachment proceedings were issued by a Republican-controlled Congress against a Democratic president.

Suggestions that Mr Trump may have sought to interfere in an FBI Investigation brings him into dangerous territory, however. Obstruction of Justice is an impeachable offence.

However, it is still not clear-cut if Mr Trump could be accused of obstructing justice as the FBI investigation – at least from the information that is available in the public domain - is a counter intelligence operation, not a criminal investigation.

Despite the outcry over the latest Trump revelations, there are no indications that either of these options will be pursued in the immediate term for one main reason– they both need the support of Republicans in Congress.

To date, the Republican party - however reluctantly - has backed Mr Trump, though it remains to be seen if the latest revelations change minds.

Next year’s mid-term elections may also change things, with Republicans up for re-election in particularly tough districts likely to reassess their support for Mr Trump with a view to how voters are feeling.

With an FBI Investigation and four separate congressional inquiries underway, senior Republicans may insist that these investigations run their course, though Mr Comey may testify publicly before one of the committees, a development that could generate further revelations. Similarly transcripts or tapes may be subpoenaed, which could give rise to more incriminating information.

The White House is likely to continue to stamp down on the latest reports by focusing on the leaks that led to the reports rather than the substantive issues themselves.

Mr Comey has not entirely been exonerated – Trump supporters have been quick to question why it took three months for this information to emerge, and have also highlighted his response to the president when, according to his own memo, he appears to concur with Trump that Mr Flynn is a good guy.

Nonetheless, this week’s developments have evoked a sense of a White House that has lost control of events and a president who has become increasingly erratic.

What comes next is anyone’s guess.