Some 10 suspected migrants found in lorry container on English motorway 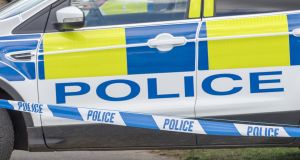 No further details regarding ages or nationalities was immediately available. File photograph: iStock

Some 10 suspected male migrants have been found inside a lorry container on the M25 in England.

All were arrested on suspicion of immigration offences along with the driver of the vehicle, which was found near the town of Waltham Abbey in Essex at around 6pm on Thursday, Essex Police said.

One was taken to hospital for treatment.

No further details regarding ages or nationalities was immediately available.

It comes after gardaí found 16 people in a sealed trailer on board a ferry on Thursday afternoon after staff heard noise coming from inside.

The passenger service arrived in Rosslare in Co Wexford from Cherbourg in France.

An Essex Police spokeswoman said: “Police were called to reports of people inside a lorry container at around 6pm.

“Officers attended and found 10 men in the rear of the container.

“They have been arrested on suspicion of immigration offences. One was taken to hospital for medical treatment.

“The driver has been arrested. Inquiries continue.” – PA