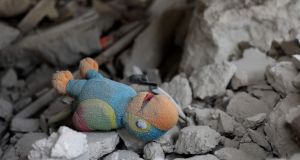 A toy lies amongst the rubble of a building destroyed by a reported Russian air strike on al-Barra in Idlib province on November 15th. Photograph: Omar Haj Kadour/AFP via Getty Images

At least 24 people have died after Syrian government shelling targeted a displacement camp and hospital, rescue workers and residents have said, as president Bashar al-Assad continues to pound the last pocket of opposition-held territory in the country.

A camp hosting 7,000 people near the village of Qah in Idlib province was hit by a ground-to-ground missile carrying illegal cluster-bomb submunitions on Wednesday night. The attack killed at least 16 people, injured dozens more and started fires which blazed through the camp’s flimsy tents.

Another rocket damaged the Qah maternity hospital 30m away from the camp, killing two women and six children and injuring four medical workers, the Syrian American Medical Society said in a statement. All patients were evacuated and the facility has now been abandoned.

“All the children started crying, people started running towards the olive orchards trying to escape,” said Zaher Ghara’a, a 42-year-old resident who has lived in the displacement camp for six years.

“I saw tents burning, then heard the White Helmets [a Syrian civil defence service], ambulances and fire engines approaching. My cousin’s van was damaged but the tyres were still good so he helped transporting people to hospitals. It was covered in blood by the time he finished.”

It took two hours to extinguish the fires in the camp and evacuate the wounded, said Ibrahim Abu al-Laith, a White Helmets spokesman, adding that the area was still off-limits on Thursday due to an unexploded ordnance.

Bombardment by Mr Assad’s forces and his Russian allies has killed more than 1,300 people and sent almost 1 million fleeing to the Turkish border since an offensive against Idlib and the surrounding countryside began in April.

Wednesday’s attack on Qah, however, was much further north than the campaign’s parameters to date, sparking fears that the already ferocious assault could escalate.

Aid agencies have repeatedly warned that attacking Idlib puts the lives of 3 million civilians in danger and could trigger the worst humanitarian disaster of the almost nine-year-old war to date. Originally home to about 1 million people, the province’s population has been swollen with civilians displaced by fighting elsewhere in the country.

The incident at the Qah clinic marks the 65th attack on 47 health facilities in the area since April.

The facility was supposedly on a UN no-strike list shared with parties active in Syrian airspace, but Damascus and Moscow have been repeatedly accused of using those GPS co-ordinates to deliberately target civilian infrastructure.

“I think the regime targeted this camp on purpose,” said Dr Muheeb Qadour, the director of nearby Atmeh hospital, who rushed to the scene to help.

“The hospital is just for women and children and it’s near the border, away from the frontline. There are no military headquarters in this area.”

A ceasefire deal brokered by Russia and Turkey in September last year was supposed to save Idlib from the impending regime attack, but it unravelled after the hardline Hayat Tahrir al-Sham wrested control of the area from more moderate rebel groups in January. A Russian-announced unilateral ceasefire in August was also never fully implemented.

Many in Idlib have expressed anger at Turkey, which backs Syrian opposition groups, for abandoning them to focus on Ankara’s new campaign against Kurdish forces in Syria’s northeast.

“Turkey is the guarantor of the alleged ceasefire but the regime and Russia haven’t abided by the agreement,” said Ghara’a. “It’s just a weak excuse, a trick.” – Guardian