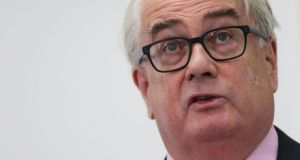 Chief Justice, Frank Clarke will launch the report on Monday at NUI Galway, where the court is sitting this week, the first time it has sat outside a courthouse since the Four Courts reopened in 1932. Photograph: Brian Lawless/PA Wire

A looming Brexit is among the challenges facing the Supreme Court, the Chief Justice has said in the court’s first-ever annual report.

The report discloses a dramatic drop in waiting times for appeals from between five to seven years in 2014 to an average one year for the Supreme Court and two years for the Court of Appeal.

It also notes a continuous rise in the number of appeals in recent years, with the largest numbers concerning criminal and immigration law issues.

The report provides, for the first time, summaries and notes of the court’s major judgments delivered in 2018. Future annual reports will do the same, providing a useful reference tool.

Another first is that appeals, submissions and follow-up work may now be filed online to the Supreme Court under a system which went live last month.

The Chief Justice, Mr Justice Frank Clarke, will launch the report on Monday at NUI Galway, where the court is sitting this week, the first time it has sat outside a courthouse since the Four Courts reopened in 1932.

As part of those sittings, the seven-judge court will rule on Tuesday on the appeal by businessman Denis O’Brien over the High Court’s dismissal of his challenge to statements made in the Dáil about his banking affairs.

It will also hear an appeal by two objectors over a planning approval for the first phase of an €850 million data centre by tech giant Apple in Athenry, Co Galway.

Although Apple is no longer proceeding with the centre, the appeal is being heard to address a range of important planning issues likely to impact on similar cases.

The NUIG sittings follow sittings by the Supreme Court in Limerick and Cork. The out-of-Dublin sittings, plus televising of some sittings, are aimed at increasing public awareness and understanding of the court’s work.

As well as hearing cases, the judges will hold seminars with legal professionals and students of the School of Law in NUIG.

Dr Charles O’Mahony, head of the school, said it was “greatly honoured” to welcome the Supreme Court to the “historic” sittings. This engagement with the broader community and law students “demystifies the role of the court and promotes the rule of law and the concept of open justice”.

The Chief Justice said he hoped the annual report will give the public a greater understanding of the work of the court, inside and outside the courtroom, and its role in upholding the Constitution and the law.

Last year was a “demanding and dynamic” year for the court, in which it disposed of 128 appeals, decided 157 of 193 applications for leave to appeal and delivered 91 reserved judgments, he said.

Of the 128 appeals disposed of, 67 were appeals decided under the Supreme Court’s reformed jurisdiction.

Following the establishment of the Court of Appeal in 2014, the Supreme Court’s appellate jurisdiction was altered so it now only hears appeals which raise issues of general public importance or are in the interests of justice.

The Supreme Court transferred 1,355 “legacy” appeals to the Court of Appeal in 2014 and the CoA has now reduced those to several hundred while also dealing with new appeals.

Apart from a small number of appeals yet to be finally decided because of their particular circumstances, the Supreme Court has now disposed of its own backlog of 800 legacy cases.

The report notes the Supreme Court is a member of 10 European and international networks, and the Chief Justice said participation in each of these requires “extensive judicial resources”.

“2019 will undoubtedly present its own unique challenges and opportunities – not least those posed by Brexit,” he said. “I remain confident that, with the continued support of our staff and the members of the Court, together we can meet those challenges head-on and capitalise on the opportunities, so as to ensure that the Supreme Court continues to fulfil its central constitutional role in Irish life and contributes to Ireland’s international standing.”

Supreme Court registrar John Mahon noted the court’s caseload continues to increase. 2018 saw 193 applications for leave to appeal, a 10 per cent rise on the 2017 figure. That compounded an 18 per cent increase in 2017 on the 2016 position, he said.