Police have forcefully broken up an hours-long blockade of exits from the Polish parliament by protesters who said that the ruling party lawmakers have violated the constitution by illegally passing the budget for next year. Video: REUTERS 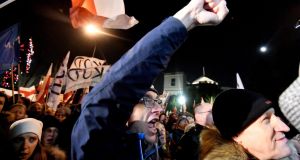 The rules proposed by the Sejm Speaker Marek Kuchcinski limit the number of journalists allowed in the Sejm building. The rules are due to take effect in 2017. Photograph: Bartlomiej Zborowski/EPA 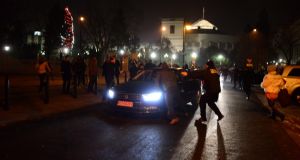 Protesters try to block the exit of the Polish Parliament in Warsaw. Michal Jazwiecki/via Reuters 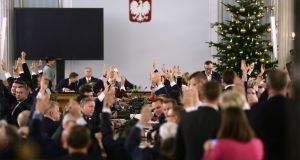 Governing party Law and Justice (PiS) parliamentarians during the session of Polish parliament at the Column Hall of the Sejm. Photograph: Tomasz Gzell/EPA

Police forcefully broke up a blockade of the Polish parliament by protesters who said the ruling party violated the constitution by illegally passing the budget for next year.

The passage sparked the biggest political stand-off in years and the sharpest escalation of the conflict between the opposition and the right wing ruling Law and Justice (PiS) party since it came to power in October 2015.

The head of the PiS party, Jaroslaw Kaczynski, left parliament in the early hours of Saturday after police used force to remove protesters blocking the exit from parliament, television footage showed.

“PiS has crossed a certain line and nothing will be the same again,” Tomasz Siemoniak, deputy leader of the biggest opposition party Civic Platform told local media outside parliament.

Mrozek said the gathering before the parliament has been declared illegal starting from midnight.

By 0237 GMT, many protesters had left, but some remained. Several opposition lawmakers said they would spend the night in parliament.

Polish opposition parties accused PiS of violating the constitution after Speaker Marek Kuchcinski moved a key vote on next year’s budget outside of the main chamber of parliament and blocked the media from recording the vote.

It was the first time since Poland’s transition from communism in 1989 that a sitting of the lower chamber of parliament and a budget vote were held outside of the main chamber.

“The ‘sitting’ was illegal. Period. This is a constitutional crisis,” Civic Platform head Grzegorz Schetyna said on social media.

PiS earlier this week announced a plan to curb access of the media to the parliament, spurring widespread protests by non-state media and the opposition amid concern the right-wing government is intent on curtailing freedom of press.

The opposition said the budget vote was illegal as it was impossible to confirm that the required number of lawmakers was present.

“There is no proof that a quorum of lawmakers was present. We suspect that people who were not allowed to vote took part,” leader of the opposition Nowoczesna party Ryszard Petru said.

Before leaving parliament, Kaczynski said the vote was legal and involved the required number of MPs. Other PiS lawmakers echoed his comments.

“What the opposition did was a scandal. And we were working,” said PiS lawmaker Jaroslaw Zielinski.

Since coming to power, PiS has passed laws that made it more difficult for the constitutional court to pass rulings, a move that led the European Commission to say democracy and rule of law were threatened in Poland.

PiS is the first party since Poland’s transition to democracy to hold an outright majority in parliament.

“I was able to enter the hall only after pushing aside guards,” Civic Platform (PO) lawmaker Slawomir Nitras said. “The access routes to microphones were blocked by chairs.”

Direct access for media to the hall was denied, with reporters only able to observe an official camera feed.

Opposition parties Civic Platform, Nowoczesna together with the PSL party said the speaker violated the constitution and demanded parliament continue its sitting next week.

Commentators warned that further escalation of the conflict might lead to violence, like in Ukraine during anti-government protests in 2013 and 2014.

“It may lead to a nation-wide tragedy. We have to be aware of this,” former head of the constitutional court Jerzy Stepien told local media.