Scotland announces full lockdown, closing schools for all of January 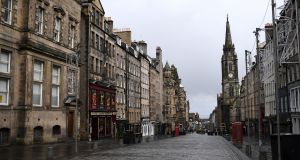 Scotland will be placed in a full lockdown from midnight on Monday for the duration of January in an effort to stop the coronavirus pandemic spiralling out of control, Nicola Sturgeon has announced.

The first minister said in an emergency statement to Holyrood that all Scotland’s schools would remain closed for the whole of January, shifting to online learning, because of the risks posed by the new Covid variant B117.

The new “stay at home” rules, mirroring the very strict controls imposed last March, would also be legally enforced and greatly restrict who was able to travel, the Scottish government’s cabinet agreed earlier on Monday.

While Scotland has not experienced the sharp escalation in the number of Covid patients in hospital seen in parts of England over the last week, the number of positive cases has risen to new heights every day, hitting 2,464 on Sunday.

Sturgeon told MSPs she was now more alarmed about the threat posed by Covid-19 than she had been since March. She said there was “compelling” evidence the new variant was about 70 per cent more infectious and could push up the R number of infections by 0.7.

She said the approval of two vaccines was “hugely positive and offers us the way out of this pandemic”, but the faster spreading variant was “a massive blow”. She added: “Indeed, it is no exaggeration to say that I am more concerned about the situation we face now than I have been at any time since March last year.”

NHS boards were already under intense pressure: 96 per cent of the beds in Ayrshire and Arran were full, as were 60 per cent of those in Greater Glasgow and Clyde, Borders and Lanarkshire health boards.

With the latest data delayed because of public sector holidays, she said a full update would not be available until Tuesday. However, in the week to 30 December, the seven-day incidence of cases per 100,000 people increased by 65 per cent, from 136 to 225.

“That increased faster spread is undoubtedly driving the very serious situation we now face,” Ms Sturgeon said. “Today’s case numbers - 1,905 new cases, with 15% of tests being positive - illustrate the severity and urgency of the situation.”

She added: “As government, our clear duty right now is to act to save lives and protect the NHS. We know that delay or prevarication in the face of this virus almost always makes things worse not better - even if it stems from an understandable desire to wait for more data or evidence.”

The new tougher measures would come into effect across mainland Scotland, which is already under the toughest tier of Scotland’s alert system, level 4. Scotland’s island groups, the Western Isles, Shetland and Orkney, would remain at level 3 for now, Ms Sturgeon added. –Guardian News and Media