Political pressures of latest pandemic phase as acute as ever 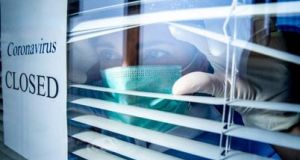 If Covid case numbers don’t fall the Government has very few interventions left available to it save returning to the total lockdown of last spring. Photograph: Getty Images

Even the nascent hope offered by a new year and a mass immunisation programme did not survive contact with the first radio broadcasts of 2021.

On the morning of New Year’s Day, HSE chief executive Paul Reid told RTÉ that Covid-19 was “absolutely rampant”; his colleague, Dr Colm Henry, later told the station it was “out of control”.

The situation is worse – far worse – than even the most pessimistic assumptions made before the most recent brief reprieve from lockdown. While there is still hope that Ireland is entering into something like an endgame with Covid-19, the political pressures associated with this latest phase of the pandemic are as acute as ever – perhaps even more so.

For starters the Government must defend its decision to reopen the hospitality sector and then allow household visits over Christmas.

Time and again Ministers have argued that the Government broadly followed advice from the National Public Health Emergency Team (Nphet). In defending the Government position they argue that the decision to reopen hospitality from December 4th was offset by a more limited version of the household visitation rules suggested by the public health team.

However, it is hard to ignore the pointed nature of the advice in Nphet’s November 26th letter. It argued that the risks associated with hospitality “remain too high at current infection levels”, especially in the context of “interaction between people, families and across generations that will inevitably happen”.

It cited growing evidence that bars and restaurants are high risk and were associated with super-spreading events, and said that if hospitality was reopened that the easing of household measures over the festive period could not also take place. Faced with what looked like a binary choice, the Government sought to blend the two options.

Since case numbers have exploded Nphet has argued that the available evidence validates its November advice, pointing to associations between opening up of hospitality and rising case numbers.

The Government has sought to emphasise the role of a new more transmissible strain of Covid-19 imported from the UK. This was particularly the case during the Taoiseach’s address to the nation after Christmas.

However, evidence from swab analysis suggests that the new strain was present in around 10 per cent of samples analysed during December. This is not a wide-ranging study but there will be more systematic analysis done of December’s samples. If that shows similar results, amid an anticipated rise in serious illness and death in the weeks ahead, there will be intense political focus on the decision to reopen and the subsequent efforts to blame the new strain.

There will also be unrelenting pressure to get the vaccine rollout right and to get it done fast. Ireland was two days behind most of the rest of Europe in administering its first jabs, and while such differences may ultimately prove to be largely cosmetic, in politics first impressions count.

The opening days of the rollout have shown that there is a large constituency of people ready to believe the State is already in the process of messing up vaccine delivery.

Cabinet sources concede there is a dearth of solid information about exactly how many doses have been administered and to whom.

“We need to do that, and we need to be absolutely transparent about how many vaccines are in stock, and what is the plan,” confided one senior source.

“It’s a massive issue,” added a Minister, “and it’s bloody obvious and it could be seen. There is no excuse for not having daily updates on vaccination.”

The programme itself is balanced finely – on Friday the co-manufacturer of Pfizer’s vaccine warned of supply issues in the EU.

The HSE told The Irish Times it is “not aware” of any delays to scheduled deliveries, while Pfizer said it was “continuing to deliver doses as per the agreement” with the European Commission.

However, those involved in the rollout concede there is limited visibility over the long-term supply of the vaccine, with only indicative timelines available from Pfizer, which has contributed to Ireland’s cautious approach of holding back one dose for every one administered. Much of this is beyond the control of the State, but that doesn’t make it any less of a real political risk.

Finally, the Government must manage a surge in infection which threatens life, livelihoods and even the stability of the health system. Multiple Cabinet sources said on Friday the most recent interventions must be given a chance to take effect before anything else is countenanced, yet the spectre of more severe restrictions hangs in the air, especially if the numbers of those becoming infected and hospitalised do not drop in the coming week.

If numbers don’t fall the Government has very few interventions left available to it save returning to the total lockdown of last spring, which could close construction, schools, reintroduce tighter rules around distance allowed from home and severely tighten the definition of essential retail.

Even with light at the end of the tunnel, the way ahead is fraught with hazard for the Government.