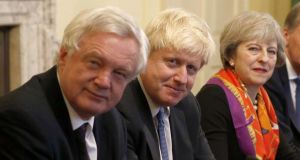 Around 3pm on Monday afternoon, the foreign ministers of 13 European countries were waiting in the neo-classical splendour of Lancaster House for the start of a Western Balkans Summit when they heard that their host Boris Johnson would not be coming.

Determined to prevent Johnson from taking control of the media narrative, Downing Street announced his departure while he was still writing his resignation letter and as the prime minister prepared to make a statement in the House of Commons about the Brexit proposal agreed by the cabinet at Chequers last Friday.

The awayday at Chequers was a formal cabinet meeting, and ministers’ approval of the Brexit plan was recorded in the usual way. Over the weekend, Brexiteers including Michael Gove, Andrea Leadsom and Chris Grayling went on television and radio to express support for the prime minister’s proposal.

Davis and Johnson did not appear, although the former foreign secretary’s friends briefed that he would not resign because he wanted to remain in cabinet to fight against further compromises.

Davis spent much of Sunday watching motor racing at Silverstone, but he called May that evening to offer his resignation, telling her she needed a Brexit secretary who believed in her plan. He had been unhappy for months, particularly since the prime minister’s top Brexit civil servant Olly Robbins was given effective control of the negotiations with Brussels late last year.

Davis’s resignation was announced shortly before midnight with the traditional exchange of letters – Davis telling the prime minister the Chequers deal meant that Britain was now unlikely to leave the customs union and the single market when it leaves the EU.

“In my view the inevitable consequence of the proposed policies will be to make the supposed control by Parliament illusory rather than real. As I said at cabinet, the ‘common rule book’ policy hands control of large swathes of our economy to the EU and is certainly not returning control of our laws in any real sense. I am also unpersuaded that our negotiating approach will not just lead to further demands for concessions,” he said.

In her response, the prime minister said she disagreed with his characterisation of the Chequers deal, which she described as a “precise, responsible and credible” approach to the negotiations.

When he appeared on BBC Radio 4’s Today early on Monday morning, Davis sounded conciliatory, making clear he was not encouraging other ministers to follow suit and expressing his admiration for the prime minister.

Steve Baker, a former leader of the European Research Group (ERG) of Brexiteer backbenchers, resigned overnight, but Downing Street was reassured by the decision of another Brexit minister, Suella Braverman, to remain in her post. Trouble was brewing, however, with Jacob Rees-Mogg declaring that a number of Brexiteer MPs would join him in voting against any Brexit deal based on the Chequers plan.

When it emerged that Downing Street had invited opposition MPs to a briefing on the Chequers plan, Rees-Mogg expressed outrage that May was considering the possibility of passing a Brexit deal with “the votes of socialists”.

Meanwhile, Johnson was nowhere to be seen, but his silence was raising suspicions and fuelling rumours about his impending departure. Downing Street made the announcement in a terse statement before May went into the Commons.

Although hardline Brexiteers criticised the Chequers deal and opposition MPs sought to torment the prime minister about her cabinet divisions, she turned in a confident performance and emerged after a couple of hours without much damage. When she left the Commons chamber she went to a meeting of the backbench 1922 Committee, the body that holds her fate in its hands.

Throughout the afternoon, rumours swept Westminster that 48 MPs had sent a letter to Graham Brady, chairman of the committee, enough to trigger a no confidence vote. Before the meeting, Downing Street said that, if such a vote was triggered, May would fight to retain her position as leader.

In the event, she was greeted with a clamour of desk-banging, and her speech calling for party unity and warning that divisions risked handing power to Jeremy Corbyn was well-received.

Interventions by Brexiteers criticising the Chequers plan were apparently outnumbered by those of MPs expressing support for the prime minister.

“Everyone in the room is very confident of her ability to deliver. We are a wide tent, of course, with different views. This is the right package for our country,” said party chairman Brandon Lewis.

Contrary to the rumours, the 1922 Committee did not trigger a confidence vote and the prime minister left the meeting to applause.