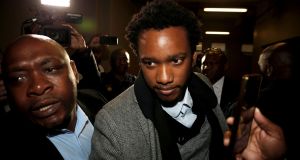 One of former South African president Jacob Zuma’s sons has been charged with corruption linked to the alleged attempted bribery of a senior government official by a businessman in his presence.

Duduzane Zuma, whose whereabouts had been unknown since his father was ousted from power in February, appeared in the Johannesburg commercial crimes court where he was charged and released on 100,000 rand (€6,350) bail.

The corruption charge relates to an alleged 600 million rand (€38 million) bribe made to former deputy finance minister Mcebisi Jonas by Ajay Gupta at his Johannesburg home in the presence of Mr Zuma.

The state claims that because the alleged bribe was made in Duduzane Zuma’s presence, and he did not report it to the authorities, he was party to the crime.

According to Mr Jonas, he was offered the money and the position of finance minister in return for helping Gupta brothers Athol, Ajay and Rajesh with their business dealings with government.

He went public with the alleged bribery attempt shortly after his boss, Nhlanhla Nene, was unexpectedly sacked as finance minister by Mr Zuma in December 2015. The Guptas have denied trying to bribe Mr Jonas.

The Gupta business family stand accused of colluding with Mr Zuma during his nine-year presidency to illegally acquire billions of rand worth of contracts from state-run enterprises and government departments.

During much of this time, Duduzane Zuma worked for the businessmen and he is suspected of acting as an intermediary between the brothers – who are originally from India – and his father.

All parties deny any wrongdoing and claim they are the victims of factional battles taking place in the ruling African National Congress party.

Mr Zuma (34) arrived back in South Africa late last week and was seen at his brother’s funeral over the weekend. Vusi Nhlakanipho Zuma (25) died recently of lupus, a systemic autoimmune disease. A funeral service was held for him in Johannesburg on Saturday.

The corruption case against Mr Zuma has been postponed until January next year to allow for further investigations. Mr Zuma handed in his passport to the authorities as part of his bail conditions, and he must sign on every day at a Johannesburg police station.

Mr Zuma’s bad week is set to continue as he must appear in a separate court case on July 12th on two counts of culpable homicide.

These charges relate to a car crash in February 2014 in which his Porsche hit a taxi in Johannesburg after he lost control of it in heavy rain. One woman died instantly as a result of the collision and a second succumbed to her injuries a few days later.