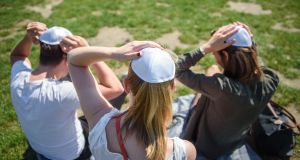 Three young Germans stage a show of solidarity with Jewish people after a spate of anti-Semitic assaults in April. Photograph: Gregor Fischer/AFP/Getty Images

German Jews have joined forces with civil society groups to sound the alarm about attacks on Jews following another incident in Berlin at the weekend.

Some 10 people were detained in Berlin, suspected of beating up a Jewish man from Syria wearing a Star of David chain on Friday night.

The attack, which left the man with head injuries, took place at the Hackescher Markt area of eastern Berlin that is popular with tourists. Police say the 25-year-old Syrian asked one of the people in custody for a light for his cigarette, after which the brawl began.

The 10 arrested were all aged between 15 and 25; six were reportedly Syrian nationals, three Germans and the nationality of the other is unclear. Three of the alleged perpetrators were women.

One of the attackers ripped the chain from the man’s neck and made anti-Semitic remarks. When the man ran away, he was pursued by a group, knocked to the ground and beaten and kicked. The attack ended only after passersby intervened, and prompted a call from Germany’s Jewish groups for greater action by local and federal government to tackle anti-Semitism.

“I expect the government to take seriously anti-Semitism among Muslims,” said Lala Süsskind, head of the Jewish Forum for Democracy and against anti-Semitism (JFDA), presenting its manifesto on Monday in Berlin.

The group wants all state-funded organisations in Germany to make an explicit public statement rejecting anti-Semitism. The move is seen as a challenge to a new Islam theology department at a Berlin university, supported by Muslim groups that have declined to condemn annual Muslim demonstrations in Berlin calling for the end of Israel.

The JFDA warned in its declaration on Monday that relativising anti-Semitism among some German Muslims – and among new refugee arrivals – was viewed by victims of anti-Jewish attacks as a further slap in the face. In its declaration the organisation added that anti-Semitic attacks were “always an attack on human dignity” and that Germany’s response to such attacks was a “litmus test for German democracy after the Shoah”.

Recent months have seen a series of high-profile anti-Jewish incidents on Berlin’s streets and in schools.

On Saturday, the owner of an Israeli restaurant in Berlin made public a series of death threats made against him since a passerby made anti-Semitic remarks against him last December.

Seven months after that attack, filmed and posted online, restaurant owner Yorai Feinberg said Berlin prosecutors had yet to bring charges against the perpetrator.