Restrictions tighten in northwest England due to Covid-19 rise 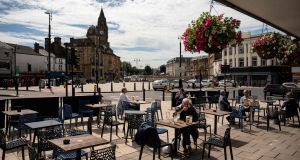 People from different households in Greater Manchester, parts of East Lancashire and West Yorkshire will be banned from meeting each other indoors from midnight, British health secretary Matt Hancock has said.

Mr Hancock said “households gathering and not abiding by the social distancing rules” was a reason for the stricter rules and it was in order to “keep the country safe”.

He said: “We take this action with a heavy heart but unfortunately it’s necessary because we’ve seen that households meeting up and a lack of social distancing is one of the causes of this rising rate of coronavirus and we’ll do whatever is necessary to keep the country safe.”

Mayor of Greater Manchester Andy Burnham welcomed the measures, which he said would be reviewed on a weekly basis.

Mr Hancock added: “We’re constantly vigilant and we’ve been looking at the data, and unfortunately we’ve seen across parts of northern England an increase in the number of cases of coronavirus.

“So, today, I held a meeting of the government’s gold committee and working with local leaders, including, for instance, Andy Burnham the mayor of Greater Manchester, we’ve decided that we need to take action across Greater Manchester, East Lancashire and parts of West Yorkshire.

“So, from midnight tonight we are banning households meeting up indoors.”

The new restrictions apply to the whole of Greater Manchester, parts of East Lancashire including Blackburn with Darwen, Burnley, Hyndburn, Pendle, Rossendale and parts of West Yorkshire including Bradford, Calderdale and Kirklees.

The same restrictions will also apply to Leicester, which saw the first so-called “local lockdown” imposed on June 29th.

Mr Burnham said “by not acting selfishly” the measures could be removed more quickly.

He added: “Over recent days, there has been a marked change in the picture across Greater Manchester with regard to the spread of Covid-19.

“We have gone from a falling rate of cases in nearly all of our boroughs last week to a rising rate in nine out of 10 affecting communities across a much wider geography. In Rochdale, the one borough where cases have fallen, they are still too high.

“We have always said that we will remain vigilant and be ready to respond quickly should the need arise. In line with that approach, I have agreed with the health secretary that it is right to act on the precautionary principle and introduce modest measures now to bring down the rate of new infections.

Reacting to the move on Twitter, Scotland’s first minister Nicola Sturgeon said: “The UK government is right to act quickly if they think the situation warrants it.

“But this is a sharp reminder that the threat of this virus is still very real.” – PA