Event was announced before current restrictions were extended to August 10th 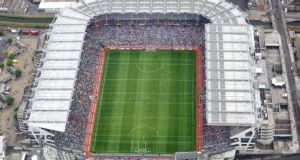 When the Eid celebration was announced for Croke Park the then government roadmap for lifting Covid-19 restrictions would have allowed for 500 particpants at all public events from July 20th. Photograph: Norman McCloskey/Inpho

Numbers taking part in Eid celebrations at Croke Park on Friday will be limited to 200 despite a request to Taoiseach Micheál Martin from Muslim organisers that the 500 who had booked be allowed take part.

However, on July 15th the Government extended the 200 restriction on attendance at public gatherings until August 10th.

Shaykh Umar Al-Qadri, chair of the Irish Muslim & Peace Integration Council,which is organising the Eid event, wrote to the Taoiseach requesting that the Eid celebrations involving the 500 people who had booked a place be allowed go ahead on the pitch at Croke Park on Friday.

Shaykh Al-Qadri said he was requesting the exemption for Eid event “similar to the precedent set by outgoing taoiseach Leo Varadkar following a plea made by Archbishop Diarmuid Martin”.

He noted that following the Catholic Archbishop of Dublin’s request, exception was “granted to churches and mosques to increase the number [attending at public worship] from 50 to 100 with the justification that many churches were able to accommodate larger gatherings while maintaining social distancing requirements”.

He continued that “Eid at Croke Park can certainly accommodate 500 people while maintaining social distancing”.

In declining the Shaykh’s request the Taoiseach pointed out in a letter that the exemption granted Archbishop Martin referred “to indoor places of worship with large capacity and where additional measures are imposed. This applies to all places of worship - Churches, Mosques, Synagogues etc. but does not apply to mass gatherings at other events, for example football stadiums”.

He continued that “during this pandemic the health and wellbeing of the people of Ireland must take precedence and we need to continue to act responsibly to ensure the containment of the disease.”

The Taoiseach also pointed out that many groups and organisations had been in touch with him “seeking to lift the current limitation on outdoor numbers but the Government is taking a cautious approach following the latest public health advice and cannot accede to increasing the limit on mass gatherings at this time”.

In response Shaykh Al-Qadri told The Irish Times he understood the Taoiseach’s position.

“The complexity of the situation and the recent increase in Covid-19 numbers is worrying. We need to be responsible,” he said.

“Both Dublin’s Archbishops had accepted invitations to attend,” he said, referring to Archbishop Diarmuid Martin and Church of Ireland Archbishop Michael Jackson. So too had GAA President John Horan while other faith leaders had also been invited as had members of the Government. Minister for Children, Disability, Equality and Integration Roderic O’Gorman confirmed he would attend, Shaykh Al-Qadri said.

The Eid event will be broadcast live on the RTÉ News Now channel, beginning at 9.30am, continuing to about 11.30am.