Residents’ blog warned of fire hazards at London tower since 2013 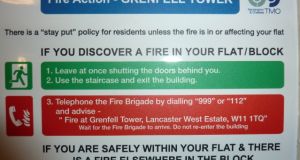 Residents who escaped the inferno at a west London tower block complained there had been no fire alarm, with people relying on neighbours to wake them as the blaze spread.

They said official advice in the event of a fire had been to stay inside.

Mickey Paramasivan, who was in his seventh floor flat with his partner and child, said: “If we’d listened to them and stayed in the flat we’d have perished.”

A residents’ blog had warned of fire hazards at Grenfell Tower, which went up in flames on Wednesday morning, ince 2013.

Firefighters battled to rescue those trapped inside the 24-storey Notting Hill tower block after a huge fire broke out and swept through apartments shortly after 1am on Wednesday morning.

The Grenfell Action Group blog wrote several posts since 2013 warning of fire hazards at the tower, including service vehicles being parked overnight in emergency access areas, rubbish accumulating at the tower entrance obstructing access and a lack of fire safety instructions from the Kensington and Chelsea Tenant Management Organisation (KCTMO).

The group claimed access to the building was “severely restricted” for emergency services and other vehicles and that residents were advised to stay in their flats in case of fire.

The group said there was one entry and exit to Grenfell Tower during improvement works at the block in Latimer Road and it had issues with evacuation procedures at the building.

The residents resurfaced their concerns on the blog this morning, writing:

“Regular readers of this blog will know that we have posted numerous warnings in recent years about the very poor fire safety standards at Grenfell Tower and elsewhere in RBKC.

“All our warnings fell on deaf ears and we predicted that a catastrophe like this was inevitable and just a matter of time.”