A resident of the London tower block caught in a blaze early on Wednesday (June 14) morning said smoke was "everywhere" and there were 'people screaming'. The fire broke out just after 0000 GMT. 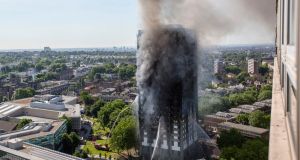 Smoke billows from a fire that has engulfed the 24-storey Grenfell Tower in west London. Photograph: Rick Findler/PA Wire 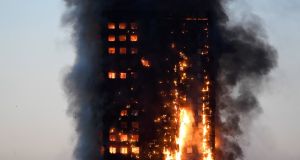 Flames and smoke billow as firefighters deal with a huge fire in a tower block at Latimer Road in West London, Britain June 14, 2017. REUTERS/Toby Melville 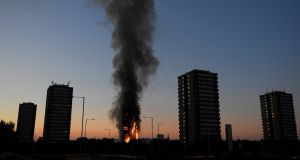 Flames and smoke billow as firefighters deal with a serious fire in a tower block at Latimer Road in West London. Photograph: Toby Melville/Reuters

At least 12 people have died with another 18 in critical condition in hospital after a huge fire destroyed a 24-storey tower block in west London.

London Ambulance service has said 68 patients have been taken to six hospitals across London, with 18 people in critical care. A further 10 patients made their own way to hospital.

Firefighters said they had  rescued 65 people - some in pyjamas - from the 43-year-old block, a low-rent housing estate overlooking upscale parts of the Kensington area.

More than 200 firefighters with 40 engines were still dealing with the blaze hours after it had started in Grenfell Tower in North Kensington.

British prime minister Theresa May has said there will be a “proper investigation” of the fire, adding: “If there are any lessons to be learned they will be, and action will be taken.”

Up to 600 people lived in the building and many remained unaccounted for on Wednesday.

Eyewitnesses said they saw lights flashing at the top of the tower block and other said they saw residents, whom they thought to be trapped inside, standing at windows in the upper floors.

“This is a large and very serious incident and we have deployed numerous resources and specialist appliances.”

The statement said the fire reached from the second storey of the building to the top and the cause of the blaze was not yet known.

The London ambulance service said its crews included a hazardous area response team. The London mayor, Sadiq Khan, said in a brief statement on Twitter that it was a “major incident”.

A Guardian reporter on the scene said one man could be seen waving a blanket from the window and calling for help.

People from neighbouring estates were huddled outside in their pyjamas near the flaming building, some shouting “put your head out the window” or telling the man to shout his flat numbers so they could guide the fire services to him.

We have taken 30 patients to five London hospitals following the fire at #GrenfellTower & we remain on scene pic.twitter.com/lxfRseAIkg

Huge fire at west London tower block. Sky's @ashishskynews describes a man trapped inside his flat, seen pacing up and down #GrenfellTower pic.twitter.com/2baMV8gDKf

Fire officers were spraying his window with water to try and douse the flames.

“There was a woman with a child. I saw her waving maybe 30mins ago,” said a man who asked not to be named. “She said I’ve got a child - I saw them spraying her window.”

Hadil Alamily said she saw “someone jump on fire from the top floor”. She had seen the man flashing a light in an SOS pattern. “He was screaming help, help, help but no one helped. He dashed a mattress out of the window. He was literally on fire and jumped.”

Just before 4am the Metropolitan police said people were being treated for a range of injuries and evacuations were continuing. Reports said police on the scene were urging people trapped inside the building to place a wet cloth over their mouths and “self-evacuate”.

Residents of nearby flats were told to leave their homes because of debris falling from Grenfell Tower.

Photographs and video from the scene showed huge flames engulfing most of the block, with lights on in many windows. The tower contains 120 homes.

Other witnesses described hearing shouts for help coming from people inside the tower and walls of the building creaking.

Fabio Bebber tweeted from the scene that the fire had taken over most of the block.

Neighbouring streets were being evacuated and roads in the area, including the Westway, were closed. Celeste Thomas said there were hundreds of people outside the building with residents and families trying to find each other. One local resident and witness, Victoria Goldsmith, told Sky News: “The whole building seems to be engulfed now. It’s spread all the way to the top.

“There was literally two people trapped at the top and they had mobile phones and they had the lights trying to flash them and signal people ... They couldn’t get to them ... the fire kept going and the lights went out.

“They are trying to get it under control. Its pretty horrendous.”

‘I’m getting covered in ash’

George Clarke, the presenter of Amazing Spaces, lives nearby. He told Radio 5 Live: “I was in bed and heard ‘beep, beep, beep’ and thought, ‘I’ll get up and run downstairs as quickly as I could’.

“I thought it might be a car alarm outside and saw the glow through the windows.

“It’s so heartbreaking, I’ve seen someone flashing their torches at the top level and they obviously can’t get out.

“The guys are doing an incredible job to try and get people out that building, but it’s truly awful.”

Witness and local resident Tim Downie said it seemed impossible that there would not be fatalities.

“The sheer scale and the speed with which it spread, the closer you got, it seems like there must be casualties and fatalities.”

By 5am he said the building was almost entirely burned out and the fire was sending a huge plume of acrid black smoke into the sky.

“It has gone very quiet now, we heard a lot of sirens and screaming in the early hours, but now the building is pretty much all consumed. I hope everyone is out and being treated.”

He also told of seeing people using their mobile phone lights to get the attention of rescue crews and pieces of debris falling from the building, including plastic cladding that “popped off” in the heat.

The tower block was built in the 1970s as part of the Lancaster West Estate project.