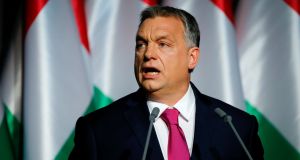 Viktor Orban: his allies passed the new law as the EU launched legal action against Hungary, Poland and the Czech Republic for their refusal to accept quotas of refugees. Photograph: Laszlo Balogh/File Photo/Reuters

Hungary’s parliament has voted to tighten control over non-governmental organisations that receive financing from abroad, as prime minister Viktor Orban continues to rail against alleged foreign interference in his rule.

Mr Orban accuses the European Union of meddling in Hungary’s affairs on everything from asylum policy to education reform, and he is locked in a bitter feud with Hungarian-American billionaire George Soros and the liberal NGOs that he funds.

Mr Orban’s allies passed the new law as the EU launched legal action against Hungary, Poland and the Czech Republic for their refusal to accept quotas of refugees, and amid international condemnation of legal changes that threaten the Soros-funded Central European University in Budapest.

The new law obliges NGOs receiving more than 7.2 million forint (€23,000) from non-Hungarian donors to state that they are “foreign-funded” and provide much more detail about their income. Failure to comply could lead to fines and eventual closure.

Critics say the rules are intended to hinder the work of NGOs and portray them as suspicious and disloyal elements, in much the same way as Russian law forces internationally funded groups to declare themselves as “foreign agents”.

The law’s authors insist it will boost transparency, saying it is “of vital public interest that society and citizens clearly see what interests these organisations represent... Foreign interest groups strive to take advantage of civil organisations.”

Gergely Gulyas, deputy speaker of parliament, said: “No one wants to limit anyone’s operations in Hungary but organisations whose foreign financing is not known can’t be allowed to take part in Hungarian public life.”

Opponents regard the legislation as another blow against critics of Mr Orban, who wants to make Hungary an “illiberal democracy” and predicted that 2017 “would be about squeezing out the forces symbolised” by Mr Soros.

Two of Hungary’s leading Soros-funded NGOs, the Hungarian Civil Liberties Union and the Hungarian Helsinki Committee, said they would defy the law and seek to challenge it in national and international courts.

More than 180 Hungarian NGOs have signed a protest against the law. They say it is unnecessary because they are already transparent; “stigmatising” because it implies they “pose a threat to the country”; and harmful because it “undermines mutual trust in society and questions the right to freedom of expression”.

The new law would be “a further slide down the dangerous path of closing civic space, something that has no place in a European democracy”, she added.