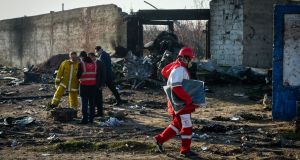 Rescue workers search the wreckage of the Boeing 737-800 aircraft operated by Ukraine International Airlines, which crashed shortly after take-off in Iran on Wednesday. Photograph: Ali Mohammadi/Bloomberg

A pair of university lecturers and two students were among the 63 Canadian victims of a plane disaster in Iran in Wednesday, according to a Iranian news agency and documents posted to social media.

All 176 people on board the Ukraine International Airlines Boeing 737 were killed when the plane crashed shortly after take-off from Tehran. It had been heading for the Ukrainian capital Kiev.

Iran’s ISNA news agency said two of the dead were Pedram Mousavi and Mojgan Daneshmand. Both are professors at the University of Alberta, according to the university’s website.

ISNA named two other victims as Marzieh Foroutan and Delaram Dadashnejad. A picture of the pair’s identity cards for the crash site posted to Twitter showed that Foroutan was a student at the University of Waterloo in Ontario and Dadashnejad was studying in the province of British Columbia.

“Our hearts are with the loved ones of the victims, including many Canadians. I have been in touch with the government of Ukraine,” Canadian foreign minister Francois-Philippe Champagne said on Twitter.

The disaster was the largest recent loss of life among Canadians since an Air India Flight blew up off the southwest coast of Ireland in 1985, killing 268 Canadians.

Canadian prime minister Justin Trudeau said on Wednesday that the government will reach out to international partners to ensure that the crash is thoroughly investigated.

“Our government will continue to work closely with its international partners to ensure that this crash is thoroughly investigated, and that Canadians’ questions are answered,” Mr Trudeau said in a statement after offering his condolences to the friends and families of the victims.

Mr Trudeau also said the government is in touch with the government of Ukraine, and “is speaking to relevant authorities and to international partners”.

Canada broke off diplomatic relations with Iran in 2012. There are no direct flights between Canada and Iran, which means passengers need to use connecting flights.

“I’ve had family take the Tehran to Toronto route via Kiev in the past year. It’s been a new affordable route for many Iranian-Canadians who don’t have direct flights from Canada,” Mahsa Alimardani, a student at Britain’s Oxford University, said on Twitter. – Reuters