London Letter: ‘You have just got to slay the leader of the Opposition – and vice versa’ 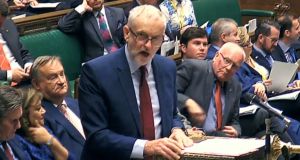 “It was all so different before June’s election, when Jeremy Corbyn was greeted with cheers from the Conservatives and a dark, mutinous hush from the benches behind him.” File photograph: PA Wire

Theresa May has had a bruising few weeks at prime minister’s questions (PMQs), as Jeremy Corbyn has hit relentlessly at her government’s weakest points. Focusing on domestic policies such as the economy, social welfare and public service pay, the Labour leader has put the prime minister on the back foot week after week.

Most Conservative MPs still roar dutifully behind her but if you scan the benches farthest from the dispatch box, younger Tories look sheepish as they utter small bleats of support. It was all so different before June’s election, when Corbyn was greeted with cheers from the Conservatives and a dark, mutinous hush from the benches behind him.

“Prime minister’s questions, I am afraid, is mortal combat. You have got to be the last person standing and you have got to have your side cheering and the other side crestfallen. That is just how it is at the moment.

‘No more Punch and Judy’

“Anybody who has tried to be ‘no more Punch and Judy’, which was David Cameron’s line, and Tony Blair saying he was going to do it differently, it just doesn’t work. I hope one day that it does, but for the moment you have just got to slay the leader of the Opposition and vice versa,” she said.

Harman was speaking to the Institute for Government as part of Ministers Reflect, a series of interviews with former ministers about the experience of governing. She described how, after 15 years in opposition, she was ill-prepared for ministerial office when Tony Blair won power in 1997.

Typically, ministers have no idea which portfolio, if any, they will be offered after a successful election, as there is no guarantee that their shadow portfolio will fall to them. When Sayeeda Warsi, a Conservative peer, was brought into the cabinet by David Cameron, she had to Google her job to work out what it meant.

“I felt that the preparation going into government, ie the nuts and bolts of how government works, wasn’t entirely clear. I was delivered the double whammy of being given a job with no job description: minister without portfolio. At the time, I remember thinking ‘What does this mean?’ I had to go away and Google ‘a minister without a portfolio’!

“Peter Mandelson came up on the search results, so I went ‘OK that sounds quite serious!’ I remember speaking to my dad, who was constantly ringing me up, because he knew I had gone into Downing Street. He asked, ‘What is the job you are doing?’ I told him and tried to explain, to which he still said it didn’t make any sense to him,” she said.

Part of Warsi’s job was in the Foreign Office, where suave officials would overwhelm her with briefings before telling her what she wanted to do. After about six weeks, she rebelled, thanking them for their advice and setting out what her priorities actually were. They said “yes, minister, of course” and carried on exactly as before.

‘Paw print on a document’

“It makes you think ‘What’s the point of having ministers?’ – what is the point of individuals and the uniqueness they bring as a minister, being in that job, if actually all civil servants want is someone to stick a paw print on a document at the end of the day?” she asked.

Michael Heseltine took no instructions from civil servants, making sure he knew as much about his brief as they did. He learned an early lesson in managing officials as a junior minister under Peter Walker in 1970. Walker, who was environment secretary, had a daily meeting with his junior ministers, from which the officials were excluded.

“Peter told me that his permanent secretary would say, ‘Secretary of state, we understand you wish to have private discussions, but if we can’t be in the meeting how can we know what you’ve decided?’ To which Peter replied, ‘I’ll tell you.’ They didn’t like that,” Heseltine said.

“They went on again and had another counter-attack. Eventually Peter said, ‘Now I am prepared to let you come into my meetings, provided I can send one of my ministers into your permanent secretaries meetings.’ The matter was never raised again.”