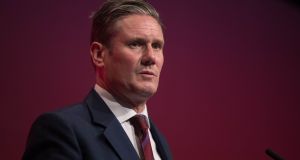 Shadow Brexit secretary Keir Starmer: says that Theresa May is sending out a confused message on Brexit because the Conservative party is so divided on the issue. Photograph: Stefan Rousseau/PA Wire

Like other hardcore Brexiteers, Lawson thinks Hammond is too gloomy about Brexit and is outraged by the chancellor’s refusal to spend much money to prepare Britain for leaving the European Union without a deal.

“I fear that he is unhelpful. He may not intend it but in practice what he is doing is very close to sabotage,” Lawson told the BBC.

For the Brexiteers, Hammond’s reluctance to plan for “no deal” is a ploy to increase pressure on Britain’s negotiators to compromise with the EU to secure an agreement. With EU leaders likely to conclude next week that insufficient progress has been made to move on to the second phase of negotiations, the focus has moved to December.

Hammond suggested this week that, unless a transition deal is agreed by the end of the year, it will be too late to offer businesses the reassurance they need that, for two years after Brexit, nothing much will change. For the Brexiteers, failure to move in December to substantive talks about a future trade deal is the signal to start preparing to leave the EU on March 30th, 2019 with no deal at all.

European Council president Donald Tusk hinted at a similar conclusion on Tuesday, saying that failure to make progress by December would mean that “we will have to think about where we are heading”.

Hammond told MPs this week that there is a theoretical chance that, without a deal, all flights between Britain and Europe would be grounded. As Brexiteers accused the chancellor of scaremongering, Brian Strutton, head of the pilots’ union, said the threat was real and serious.

“UK airlines could find they have to stop flying, it’s that serious. And this would impact passengers long before March 2019 because airlines couldn’t sell advance tickets and, frankly, would passengers risk buying them?” he said.

The dispute over planning for a “no deal” Brexit reflects a split within the cabinet between those like Hammond, who prioritise access to EU markets and others, and like Boris Johnson and Michael Gove, for whom Brexit is about maximising sovereignty. The prime minister, whose own view is unknown, has been unable to devise and sustain an agreed cabinet position on Brexit.

All her ministers pre-approved last month’s speech in Florence, which called for a status quo transition deal and promised to pay Britain’s financial dues to the EU in return for a trade deal providing more access to EU markets than Canada, but fewer obligations than Norway.

Labour’s shadow Brexit secretary, Keir Starmer, argues that May’s message is confused because her party is so divided on the issue.

“A contradiction in May’s Brexit position is that she rules out shared institutions with the EU, while she wants a close partnership with the EU. She has a double-speak on Brexit because of the deep divisions in her own party. EU countries do not know if what she says is really the shared, supported position of her party and government,” he says.

After a good election campaign during which the party said as little as possible about Brexit, Starmer used the summer to nudge Labour towards a clearer policy. The party, including its front bench, most of its MPs and Jeremy Corbyn and his circle, are now united behind a coherent position on Brexit.

Labour not only wants Britain to remain in the single market during a transition period but believes that permanent membership of the customs union and “a changed relationship with the single market” are viable options beyond that. The party believes that the EU will remain Britain’s biggest trading partner, that “no deal” would be a disaster, and that Parliament can vote down a “no deal” Brexit.

A “changed relationship with the single market” is code for a relaxation of or opt-out from rules on free movement of people and on state aid and competition, which Corbyn’s advisors fear could interfere with a future Labour government’s industrial strategy and nationalisation plans.

Unlike the government, Starmer acknowledges that Labour’s goals in the Brexit negotiations can only be achieved by sacrificing sovereignty over regulation.

“We want something which maintains the benefits of the customs union and the single market and we know that means agreeing to a level playing-field,” he says.