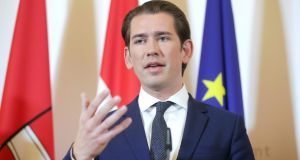 European free movement is under threat after Austria, Italy and the Czech Republic threatened to introduce controls on their borders in response to tighter German asylum policies.

Vienna has demanded explanation from Berlin about a Monday night agreement between German chancellor Angela Merkel and her Bavarian allies to erect closed “transit centres” for asylum seekers at border crossings to Austria.

The agreement was struck to defuse a row that risked the German government’s survival. It proposes expedited asylum cases in three camps in Bavaria. Migrants refused asylum, or who have already filed a claim elsewhere in the EU, will not be allowed enter Germany. If they cannot be returned to their EU point of entry they will be moved – if agreement can be reached with Vienna – over the border to Austria.

Politicians in Vienna’s conservative far-right coalition reacted with surprise and anger to the proposals and announced plans for checks on its border with Italy.

Austrian chancellor Sebastian Kurz said he would “not sign any treaties with Germany to Austria’s detriment” and said Austria stood ready to “implement measures to protect our southern border in particular”.

Italy’s far-right deputy prime minister Matteo Salvini said he was ready to implement controls on the north-south Brenner Pass to Austria “in the morning”. Prague said it would impose checks on its border with Germany.

A looming domino effect of national border controls will raise fresh questions about the EU’s free movement area. Three years after the refugee crisis peaked, Sweden, Germany and other member states have yet to lift emergency border checks they imposed on a temporary basis to stem the flow of migrants.

The European Commission has criticised temporary border checks in the past but on Tuesday its president, Jean-Claude Juncker, said the German proposals appeared compatible with EU law “at first glance”.

It refused a similar proposal to transit camps three years ago and on Tuesday likened the new plan, and its many uncertainties, to an “uncovered cheque”.

Despite anger from its left-wing , the SPD is loath to stir up again a migration row that brought Berlin’s coalition to the brink after just three months.

CSU leader Horst Seehofer, interior minister in Berlin, took back his resignation threat and will visit Vienna on Thursday to explain the plan. Dr Merkel, who had previously rejected any unilateral border arrangements, described it as a “very good compromise”.