Thailand cave rescue: what we know about the boys and their coach 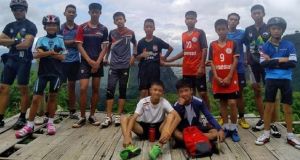 The missing Wild Boars soccer team who have been found alive in a cave in Thailand Photograph: Akkapol Chantawong/Facebook

Divers have found the football team in the Tham Luang Nang Non cave but experts warn it may be months before they can be safely rescued. The team is called the Moo Pa Academy, or the Wild Boars, and the boys are aged between 11 and 16. Their coach is 25. Here’s what we know about them:

Ekkapol Chantawong, 25 – The coach’s nickname is Aek. His aunt, Kham Chantawong, told the Guardian’s correspondent Hannah Ellis-Petersen, that he’d visited the caves in the past. “He took very good care of the kids,” she said, her face pale and pained. “They all got on very well together. The children never fought or even cursed at each other.” The son of another player who skipped the cave trip, Noppadon Kanthawong, told AP he was “very dedicated”.

“He would be there at the field waiting for kids to show up after school. It is a great way to keep healthy, away from screens and have friends. I can tell that they are very close to each other.”

Duangphet Promthep, 12 – Kham Phromthep, whose 12-year-old son, Duangpetch Phromthep, was among the boys trapped in the cave, said he was ecstatic when he saw his son in the video, according to the New York Times.

Somphong Jaiwong, 13 – Like many in the team his wish is to play professional football. “Pong is a cheerful boy, he likes football, and every sport. He dreams of becoming a footballer for the Thai national team,” the teenager’s teacher Manutsanun Kuntun told AFP, using his nickname. “Our class is still confident he will be okay,” she said.

Mongkol Boonpium, 13 – Thinnakorn Boonpiem told AFP his son is a “good boy” who loves to study – almost as much as football. He joined the local team a year ago and on the day he went missing had gone to practice as usual. He didn’t tell his dad he planned to go trekking in the cave, and his family started to worry when he never came home. “Since then I’ve been here in front of the cave,” the grim-faced father of two said.