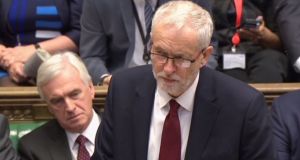 Jeremy Corbyn’s Labour could emerge from the forthcoming general election in third place behind the Liberal Democrats in terms of vote share, according to one of the UK’s leading political scientists.

Speaking on Wednesday’s Inside Politics podcast, Prof Tim Bale said another poor election result for Labour would likely mean the party, which has been in opposition for seven years, will spend at least another 10 years in the political wilderness.

“We could be facing a situation where Labour drop well below 200 seats. Now that obviously is important for the Labour Party at this election, but it’s also important at the next election”, said Prof Bale. “If a party loses one election very very badly in the UK, it’s very unusual for them to be able to come back at the election after that”.

Although unlikely to fall behind the Liberal Democrats in the number of seats in the House of Commons due to its greater number of safe seats, there is a real possibility the divided Labour Party will secure fewer votes overall, said Prof Bale.

A greater worry for Labour would be loss of Commons seats to the Conservatives, said Prof Bale.”The Conservatives could emerge with an overall majority of 50, 60 and some people are even saying it could go into three figures”.

Also on the podcast, Glasgow-based journalist Peter Geoghegan spoke about how Theresa May’s decision displays little understanding or concern for the political mood in Scotland or Northern Ireland.