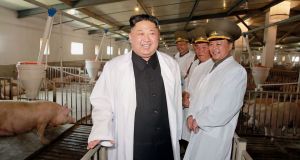 North Korean leader Kim Jong-Un visits a pig farm at Taechon Air Base of the Korean People’s Army. An American citizen was reportedly arrested at an airport in Pyongyang on Saturday as he was trying to leave the country. Photograph: AFP/KCNA VIA KNS

North Korea has detained a US citizen, the Swedish embassy in Pyongyang and a university chancellor said on Sunday, raising the number of Americans thought to be held by the secretive nation to three.

The arrest, if confirmed, would further complicate Washington’s relations with the country at a particularly tense moment.

The man, Tony Kim, who also goes by his Korean name, Kim Sang-duk, was detained on Saturday, Park Chan-mo, the chancellor of Pyongyang University of Science and Technology, told the Associated Press.

Mr Park said Mr Kim had taught accounting at the university for about a month, and had taught at Yanbian University of Science and Technology in China before coming to Pyongyang. He said Mr Kim had been detained by officials at Sunan International Airport in Pyongyang as he was trying to leave North Korea.

South Korea’s Yonhap News Agency, citing unnamed sources, earlier said that a Korean-American man identified only by his last name, Kim, had been arrested at the airport.

It said the man, who is in his late 50s and is a former professor at Yanbian University, has been involved in aid and relief programmes to North Korea.

The Swedish embassy in Pyongyang, the capital, said it was aware that the North had recently detained a Korean-American citizen, the Associated Press reported. The United States does not have formal diplomatic ties with North Korea, and the embassy looks after consular affairs in the North on behalf of Washington.

The South Korean government, including its Unification Ministry and National Intelligence Service, said it could not confirm the report.

North Korea has a history of detaining foreigners. The North has been accused of holding Americans on what many see as dubious charges in order to use them as diplomatic leverage. At least two other Americans are known to be held in the country.

Relations with Washington have reached a pitch recently, as North Korea has tested missiles and the US has threatened to send warships to the region.

In 2014, an American citizen, Jeffrey E Fowle, was arrested and accused of leaving a Bible in a hotel. He was released later that year.

Kenneth Bae, a Korean-American missionary sentenced to 15 years’ hard labour after he was charged with trying to establish a secret proselytising network, was freed in 2014, after the American government sent the director of national intelligence at the time, James R Clapper jnr, to North Korea.

Americans are not the only foreigners being held in the North. In 2015, a South Korea-born Canadian pastor was sentenced there to hard labour for life on charges of plotting to overthrow the North Korean leadership. The North has also arrested at least four South Koreans on spying and other charges in recent years.

Simultaneous with the reported arrest, North Korea said also on Sunday that it was ready to sink a US aircraft carrier, the USS Carl Vinson, to demonstrate its military might.

US vice president Mike Pence said on Saturday the carrier would arrive “within days” but gave no other details.

“Our revolutionary forces are combat-ready to sink a US nuclear-powered aircraft carrier with a single strike,” the Rodong Sinmun, the newspaper of the North’s ruling Workers’ Party, said in a commentary.

The paper likened the aircraft carrier to a “gross animal” and said a strike on it would be “an actual example to show our military’s force”.