Mother of Westminster attacker ‘deeply shocked’ by his actions 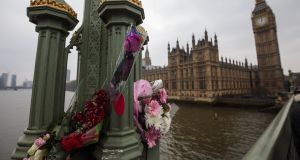 The mother of Westminster terrorist Khalid Masood has said she is “deeply shocked, saddened and numbed” by the actions of her son.

Janet Ajao said she did not condone the attack or the beliefs that had led Masood to commit the “atrocity”.

In a statement released through the Metropolitan Police, she said: “I am so deeply shocked, saddened and numbed by the actions my son has taken that have killed and injured innocent people in Westminster.

“Since discovering that it was my son that was responsible I have shed many tears for the people caught up in this horrendous incident.

“I wish to make it absolutely clear, so there can be no doubt: I do not condone his actions nor support the beliefs he held that led to him committing this atrocity.

“I wish to thank my friends, family and community from the bottom of my heart for the love and support given to us.”

British police said on Monday they had found no evidence that Masood, who killed four people in an attack on Britain’s parliament last week, had any association with Islamic State, also known as Isis, or Al Qaeda, but he was clearly interested in jihad.

Masood drove a car through a crowd of pedestrians on Westminster Bridge, killing three and injuring about 50, then ran through the gates of parliament and fatally stabbed a police officer, before he was shot dead by police. Neil Basu, senior national co-ordinator for UK counter-terrorism policing, said there was no evidence that Masood had been radicalised in prison in 2003 and it was pure speculation to suggest that had happened.

Masood (52) was British-born and had several previous convictions for offences such as grievous bodily harm, possession of a knife and public order offences. He had not been convicted of any terrorism offence. His attack method appears to be based on low sophistication, low tech, low cost techniques copied from other attacks, and echo the rhetoric of Isis leaders in terms of methodology and attacking police and civilians, but at this stage I have no evidence he discussed this with others,” Basu said in a statement. “I know when, where and how

Masood committed his atrocities, but now I need to know why,” he said, appealing to anyone who may have been in contact with him on the day of the attack to come forward.

Masood was born Adrian Russell Ajao and on Monday his mother, Janet Ajao, issued a statement saying she was “shocked, saddened and numbed” by his actions. “I do not condone his actions nor support the beliefs he held that led to him committing this atrocity,” she added. Interior minister Amber Rudd said on Sunday that technology companies should co-operate more with law enforcement agencies and should stop providing “a secret place for terrorists to communicate” using encrypted messages. Media have reported that

Masood sent an encrypted message moments before the attack. “There has been much speculation about who Masood was in contact with immediately prior to the attack,” Basu said. “All I will say on this point is that Masood’s communications that day are a main line of inquiry.”