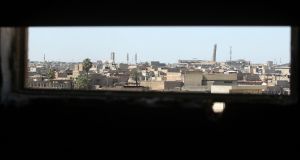 Positioned in bombed-out apartments overlooking west Mosul, Iraqi police snipers have in the last few days advanced to within a few hundred metres of the mosque where Islamic State leader Abu Bakr al-Baghdadi declared his caliphate nearly three years ago.

Through holes knocked in walls, troops have a clear view of the al-Nuri mosque’s leaning minaret with Islamic State’s black flag on its white tip – a hugely symbolic target in the battle to recapture Mosul now in its sixth month.

Al-Nuri maybe tantalising close, but risky close-quarters fighting in the narrow alleys of Mosul’s Old City near the mosque and reports of huge casualties after an air strike are forcing Iraqi and coalition commanders to change tactics.

Eyewitness from western Mosul’s al-Jadida district and Iraqi officials this week said a coalition air strike a week ago on Islamic State targets may have collapsed homes where rescue officials say as many as 200 people were buried in the rubble.

Conflicting accounts emerged since but, if confirmed, it would be one of the worst civilian massacres in the region since the 2003 US invasion as Iraq’s Shia-led government tries to avoid alienating Mosul’s mostly Sunni population.

Already the battle around the Old City had slowed, forcing Iraqi forces and coalition allies to rethink how to push through tight, densely populated streets, where fleeing residents say they are used by militants as cover.

“We know that once the mosque falls this is the end of the caliphate,” said Staff Sgt Hassan, a federal police sniper watching the maze of houses below. “But first we’re trying to protect families coming out.”

Recapturing Mosul will deliver a major blow to Islamic State, the faction also known as Isis, as preparations gather pace to retake its main base in Raqqa, Syria. Iraqi special forces, federal police, Kurdish forces and Shia militias have surrounded the militants in Mosul, cutting off routes to Syria.

Backed by US-led coalition air strikes and advisors, counterterrorism troops captured eastern Mosul by January. Since then, counterterrorism units, federal police and rapid response brigades have pushed through about half of the city’s west.

In Islamic State-held areas, residents describe well-prepared militants who stayed behind. Some are foreign, some Iraqi. They force residents to leave their homes, breaking down walls to make tunnels. They make families retreat with them or coerce them into buildings from which fighters fire on troops.

“They drive around on motorbikes looking for high positions on buildings, and they have tunnels between the homes,” said Walid, a resident who fled from near the Old City. “I saw one Russian, by his accent, he spoke only some Arabic.”

Though retreating, the militants are still dangerous. Two suicide bombers in an armoured bulldozer ploughed through military barricades two weeks ago, detonating the huge explosive-laden vehicle and destroying military jeeps and tanks at one post.

But the US-led coalition said it has countered Islamic State weaponry by jamming radio signals to the small drones they use to drop ordnance. The army has also damaged roads to prevent suicide bombers speeding into their positions, and targeted mortar crews.

In recent battles around the Old City, troops describe tough, street-by-street fighting in wrecked buildings, where narrow alleys are often cleared by hand-grenades. Streets are blocked by earth barricades manned by tank crews and troops with shoulder-fired rockets to stop suicide attackers.

The next phase of the battle will take place within Mosul’s Old City, whose origins date back to the Assyrian empire and whose alleys, streets and ancient fortress walls reflect Roman, Ottoman and Persian conquests. Even people born there say they sometimes get lost.

“We sometimes don’t see the enemy face to face,” said Abu Taib, a federal police officer draped in ammunition. “In the smaller alleys, we don’t even go in, it’s too dangerous. Sometimes we surprise them, sometimes they surprise us.”

The risks of this kind of engagement, and the danger of more civilian casualties, has prompted a rethink of tactics as Iraqi forces push to finish the Mosul campaign.

US army Brig Gen John Richardson said Iraqi forces were considering isolating the Old City rather than fighting through it while opening up a second front to split militant ranks and clear the rest of Mosul.

“They know the Old City is the centre of gravity and they know they are going to have to eventually go in clear it. The mosque is symbolic,” he said. “They have run into some tougher resistance, but it’s the terrain rather than the enemy.”

Federal police and Iraqi army sources also say initial plans are for the military to seal off the Old City and to evacuate civilians to allow US-trained counterterrorism special forces to take a larger role in carrying out incursions inside.

Bringing an army division in from the north would also force Islamic State to fight on two fronts and draw their resources away from the Old City, where commanders fear civilian casualties may undermine security and fan the sectarian tensions that helped Islamic State thrive.

The Jadida incident is already complicating the campaign. Rescue workers are still searching the site of the March 17th explosion, where one health official said 160 bodies had been recovered. Iraq’s military says 61 bodies have been pulled out so far.

Eyewitnesses describe a huge explosion that collapsed buildings and buried residents inside. But what caused the blast is unclear. The US-led coalition said it carried out a strike on Islamic State targets in the area but is still investigating.

Iraq’s military said Islamic State booby-trapped a building packed with civilians and fired from it to draw an air strike. But it said there was no sign an air strike hit the collapsed building. Other eyewitnesses say an air strike may have hit a truck bomb, which exploded and destroyed nearby buildings.

Already Sunni politicians are questioning the campaign. Iraqi parliament speaker Salim al-Jabouri told al-Arabiya television that more civilian casualties could result in a halt to operations until a way to protect residents is found.

“The international community should step in and save Mosul from blind air strikes,” Mosul politician Faris al-Sanjari told Reuters. “You can’t kill dozens of civilians just to kill one Islamic State sniper.”