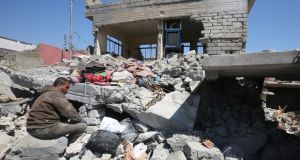 An Iraqi man sits amid the rubble of destroyed houses in Mosul’s al-Jadida area following air strikes in which civilians have been reportedly killed during an ongoing offensive against Islamic State. Photograph: Ahmad al-Rubaye/AFP/Getty Images

The US-led coalition fighting Islamic State in Iraq has taken every measure to protect civilians and will investigate reports of civilian deaths during an operation in Mosul, a US general involved in the operation said on Sunday.

Brigadier general Matthew Isler, a deputy commanding general for the US-led coalition, told Reuters he could not provide details of the military investigation into civilian deaths in western Mosul on March 17th.

The US military said on Saturday a US-led coalition strike had hit an area where residents and officials said as many as 200 civilians may have been killed as result of an air raid. Isler would not comment on specifics in the investigation.

Conflicting accounts emerged on Sunday about an explosion in west Mosul on March 17 after a US-led coalition strike against Islamic State that local officials said collapsed buildings, killing and burying many people.

Iraq’s military said 61 bodies were recovered from a destroyed building that Islamic State had booby-trapped, but that there was no sign the building had been hit by an air strike. Witnesses and local officials said many more bodies were pulled from the building after a coalition strike targeted IS militants and equipment in the Jadida district.

Isler said there was a big focus on this investigation but did not speculate about how long it would take.

He said Islamic State had intensified fighting in Mosul, the largest city in northern Iraq that militants seized in a lightning advance across a third of the country in 2014.

Iraqi forces are engaged in a months-long operation to drive Islamic State from the city.

Isler said the militants decided sometime in mid-March “that they were going to prepare lethal engagement areas for the defense of that terrain, that they would clear out what was homes, schools and mosques and fight from those positions and try to deny the Iraqis from advancing any further”.