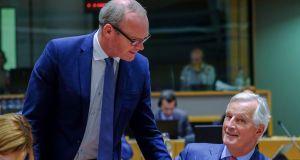 EU chief Brexit negotiator Michel Barnier has rebuffed British calls for the European Union to change its stance on the contested issue of the Irish Border, and said a “moment of truth” was fast approaching on a Brexit deal.

Mr Barnier said the bloc was ready “to improve” its proposal on avoiding a hard border on the island of Ireland, but stopped short of accepting British ideas for compromise, after the Brexit secretary, Dominic Raab, called on the EU to show flexibility.

“The European Council in October will be the moment of truth, it is the moment when we shall see if we have an agreement,” Mr Barnier said.

The Irish Border has emerged as the biggest stumbling block to the Brexit deal that British prime minister Theresa May hopes to strike with the EU this autumn.

While the EU and UK have agreed there should be no hard border to prevent any return to violence, they are deadlocked over how to manage what will become a 499km (310-mile) frontier between the UK and EU.

Both sides have proposed fallback plans, known as backstops, that would kick into place if trade talks fail to settle the question. The EU’s involves Northern Ireland following EU law on customs and goods, a plan Ms May has said no British prime minister could ever accept.

Mr Barnier said the EU was working to improve its proposal, adding that the problem had been caused by “the UK’s decision to leave the EU, its single market and the customs union”.

Seeking to counter British criticism that the EU plan eroded UK sovereignty, he said: “What we talking about here is not a land border, not a sea border, it is a set of technical checks and controls. We respect the territorial integrity of the UK and we respect the conditional order of the UK.”

Mr Barnier was speaking after a 90-minute meeting with the EU’s 27 European affairs ministers at a summit in Brussels. Many countries intervened in the debate to stress the importance of reaching a deal and its timing.

Tánaiste and Minister for Foreign Affairs Simon Coveney got a full update from Mr Barnier on the backstop developments and later described his meeting as “excellent”.

The Cabinet earlier agreed to hire 451 new staff for border duties out of a total of 1,077 needed for ports and airports.

The Republic is among several EU countries concerned that having an emergency summit in November will take the pressure off the British in the coming weeks.

Ms May will appeal to EU leaders at a summit in Salzburg to soften their stance over UK access to the single market and customs union. She is expected to tell them on Wednesday night that Brussels needs to shift. A senior Number 10 official said: “To come to a successful conclusion, just as the UK has evolved its position, the EU will need to do the same.”

Downing Street believes that the UK has developed its negotiating position to reach the Chequers plan and it is now time for other EU countries to show some flexibility in order to finally strike a deal.

The prime minister will argue that with “goodwill and determination” the UK and the EU could avoid a “disorderly” Brexit that would be damaging for both sides and instead strike a deal that benefited both.

“Neither side can demand the ‘unacceptable’ of the other, such as an external customs border between different parts of the United Kingdom. No other country would accept it if they were in the same situation,” she will say.

Ms May will tell her fellow leaders that the EU’s current proposal does not respect the constitutional and economic integrity of the UK as it effectively suggests a customs border down the Irish sea with its backstop plan.

She is expected to deny suggestions by EU officials that the UK is attempting to cherry-pick by seeking the rights of membership without the obligations.

“That is not what we are doing,” she will say. “What we are proposing is a fair arrangement that will work for the EU’s economy as well as the UK’s, without undermining the single market.”

Number 10 has been cautiously optimistic in recent days that the UK can expect a softening of tone at the Salzburg summit from some EU leaders who are keen to nail down a Brexit deal this autumn.

It remains to be seen whether that translates into a shift in negotiating position from Brussels, where officials have been more sceptical. The EU27 will wait to discuss next steps, including whether to relax Mr Barnier’s negotiating mandate, until Ms May has left the room.–Guardian Service