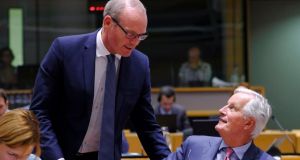 Tánaiste Simon Coveney with Michel Barnier: there is widespread concern that the detailed work being done for the planned October Brexit meeting will not be completed. Photograph: EPA/Olivier Hoslet

Ireland and the EU Brexit taskforce share strong concerns over the expected decision of EU leaders to extend time for the Brexit talks, the Tánaiste and Minister for Foreign Affairs Simon Coveney warned on Tuesday night.

The Salzburg EU summit on Thursday is expected to agree to convene a special Brexit summit in November because of widespread concern that the detailed work being done for the planned October meeting will not be completed. Mr Coveney, speaking to journalists in Brussels after a meeting with the head of the taskforce, Michel Barnier, insisted that the talks schedule should be stepped up and “intensified” so that they can still “finalise a text in advance of October” to give the ratification process sufficient time.

Later, following the meeting of European Affairs ministers, Mr Barnier echoed Mr Coveney’s concern that October must remain, what he called, the “moment of truth.”

“We want to be in a position where EU leaders can be making real decisions,” he said. “We want to see substantial progress and decisions being made in the council in October so that we can actually try to stick to the timelines that have been set now for months as opposed to allowing things drift into November and potentially December.”

Mr Coveney called on the UK negotiators to intensify their work.

“We would like to see the UK side engaging intensively now in many hours of discussion and negotiation on the detail of the backstop. I think there’s an appetite to try and find a way forward,” he said.

Mr Barnier spoke again of “de-dramatising” the backstop which he said was in no way a border. The commission, he said, is ready to improve its proposals. But the checks on goods became necessary because the UK was leaving the single market and the task-force was working on clarifying just which goods arriving in Northern Ireland would need to be checked – where, when, and by whom. But such checks can take place away from borders.

Mr Barnier had briefed EU ministers ahead of this week’s informal Salzburg summit. It is not expected the meeting will see any significant breakthrough on the Brexit issue.

British prime minister Theresa May will address leaders at their dinner on Wednesday night but will not engage directly in debate or negotiations with the 27 who will have their own discussion in her absence over lunch on Thursday.

Apart from a state of play report from Mr Barnier they are expected to begin discussions on the scope of the political declaration on future EU-UK relations that is supposed to be agreed at the same time as the Withdrawal Agreement in November.

Differences still remain between the 27, a senior EU official told reporters in Brussels on Tuesday. There is a substantial debate on how detailed the declaration and binding the declaration will be.