Deal or no deal? The countdown to Brexit starts here

There are five key stages left this year ahead of March deadline, starting in Salzburg today 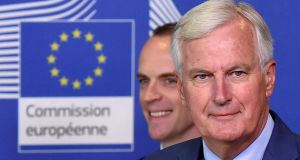 Negotiators, officials, advisers and politicians, in Brussels, London and Dublin are bracing themselves for an intensification of activity over the coming weeks as the decisive phase of the Brexit talks approaches.

Will there be a backstop, guaranteeing an invisible border? Will there be a withdrawal agreement? Or will the two sides fail to strike an agreement, resulting in a crash-out Brexit next March – and all the disruption, uncertainty and economic damage this outcome would entail?

The two sides remain deadlocked on the backstop – the guarantee that there will be no hard border in Ireland – even if there is no agreement between the UK and the EU on a future trade deal. This outcome was promised by both sides in principle in a joint declaration at last December’s summit. But there has been no agreement on how it would be achieved.

The EU has suggested that it could be achieved by essentially keeping the North in the single market and customs union after Brexit. This has been rejected by the British on the basis that treating the North differently to the rest of the UK would undermine the UK’s single market and even its constitutional integrity. Instead the UK suggested that a promise to keep the entire UK in the single market and customs union for goods only – and for a limited time – would work as a backstop instead. But this was rejected by the EU as a form of “cherrypicking” – taking the bits of EU membership that the UK likes, but opting out of the bits it doesn’t. And that is not acceptable to the EU.

Yesterday British newspapers quoted Brussels sources as saying they believed the British government would have to be faced with the immediate prospect of a no-deal Brexit before they stepped back from their position on the Irish backstop.

But senior figures in Dublin believe it is in just these circumstances that the EU side will relent.

But sources in London believe the British should keep the border issue alive for as long as possible – including into the intended next phase of the negotiations on the future relationship, where they can use it as leverage in the horse-trading that will dominate the talks on a trade deal.

Given all that, the potential for a stand-off in the talks in the coming months is evident. So how does the clock tick down towards midnight?

The countdown begins in earnest when European leaders meet for an “informal” summit hosted by the Austrian presidency in Salzburg. However, British hopes that the meeting would signal a shift in the EU’s approach are likely to be dashed. As an informal meeting, there are no written conclusions from the summit, so any change in the negotiating mandate for Michel Barnier is impossible. EU leaders are expected to give encouraging signs about the Chequers proposal, but to reiterate their position about no cherrypicking and the backstop.

All eyes will switch to the UK, where the Labour Party meets for its conference in Liverpool and the Conservatives meet in Birmingham. Prime minister Theresa May is expected to stick doggedly to her Chequers plan in the face of fierce criticism – and constant talk of a leadership challenge – from Brexiteers in her party. Jeremy Corbyn, meanwhile, will face pressure to commit to a second referendum, while Labour’s position that it will vote against a withdrawal treaty based on the Chequers plan (itself a long shot) is also likely to be challenged by its own ranks.

The official – albeit self-imposed – deadline for the withdrawal agreement, and the political declaration on the future relationship to be reached is at the October European Council summit in Brussels. But while October is likely to see frantic work by the negotiating teams, few people on either side believe a deal is likely by the summit. Conclusions are agreed and circulated for approval a few days in advance of the summit, shortening the deadline by another couple of days. However, the October summit may well signal whether an agreement is possible at all. Any change in the EU’s position would have to agreed by leaders at the summit; if there is no movement by either side, leaders are likely to emerge with the prospect of a hard Brexit looming much larger.

EU sources say that a special Brexit summit, likely to be scheduled for mid-November, is likely if the two sides believe after the October summit that a deal is likely. Under article 50, the terms of the withdrawal treaty must be agreed by EU leaders – strictly speaking, formal unanimity is not required, but in practice the European Council operates by consensus, especially on such significant issues. But the summit would only be scheduled if agreement was more or less certain – and this will depend on the progress in negotiations after the October summit.

This is the final European summit of the year in Brussels, and is the last practical date for an agreement to be reached. The withdrawal treaty would have to be ratified by both Westminster and the European Parliament before the end of March, and both could be time-consuming procedures. If there is no agreement by December, then a crash-out Brexit in March will loom, though diplomatic activity is likely to switch to examining the possibility of an extension to article 50, moving the deadline back. But the diplomatic and political damage caused by the failure to reach and agreement would seriously hinder that possibility.