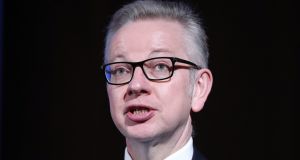 “I took drugs on several occasions at social events more than 20 years ago,” he told the Daily Mail. “At the time I was a young journalist. It was a mistake. I look back and I think, I wish I hadn’t done that.”

The admission comes as Theresa May enjoys her final days in Downing Street, with a number of the prime minister’s Conservative colleagues vying to replace her.

Mr Gove, whom the bookmakers have as third in the race behind Boris Johnson and Jeremy Hunt, insisted his past crimes should not be held against him in the leadership race. “I don’t believe that past mistakes disqualify you,” Mr Gove said.

Speaking on BBC Radio 4’s Today programme on Saturday, Mr Gove’s leadership rival Dominic Raab said he did not believe the admission would have an impact on Mr Gove’s chances in the leadership race. He said: “I certainly don’t see it barring him from this race in any way. I rather admire his honesty.”

Mr Raab, who has previously admitted taking cannabis as a student, added: “It was a long time ago and pretty few and far between. I have never taken cocaine or any class-A drugs.”

He said class-A drugs were “a bit different” but added: “I’m not going to cast any further aspersions on Michael or anyone else who is just honest about being human and doing the things that some young people do - not everyone, obviously - and holding their hand up and saying: ‘I got that wrong, move on.’”

The environment secretary’s declaration comes ahead of the publication of a book about him by the journalist Owen Bennett titled Michael Gove: A Man in a Hurry. According to the book, he admitted to having used cocaine to his advisers during the 2016 Tory leadership contest when they were putting him “through his paces”.

An inside source reportedly said Mr Gove replied: “Yes, cocaine,” when he was asked if he had ever taken drugs.

However, the former news editor at the Times was never asked the question publicly after Theresa May beat him in the second ballot of the race.

“Gove was instructed not to give that answer in public, and told to fall back on the words David Cameron had used when he was running for leader, namely that politicians are entitled to a private life before entering politics,” the book claimed.

The book is also said to reveal how Mr Gove believes he provided a public service by edging out Johnson during the 2016 race and that he enjoyed “winding up” Mrs May during clashes between the two when she was home secretary.

Mr Gove reportedly discloses how he was warned he must help deliver Brexit in order to avoid being remembered as a “stooge” of Mr Cameron, who appeared to regard him as a “court jester”.

“The book is correct,” the former justice secretary told the Daily Mail. “I did take drugs. It is something I deeply regret. Drugs damage lives. They are dangerous and it was a mistake.

“Obviously it will be for my colleagues in parliament and members of the Conservative party to decide now if I should be leader. I think all politicians have lives before politics. Certainly when I was working as a journalist I didn’t imagine I would go into politics or public service. I didn’t act with an eye to that.”

Mr Gove joins a growing number of Conservative politicians to have discussed their various transgressions with drugs.

Wildcard candidate Rory Stewart told the Telegraph last week that he had smoked opium in Afghanistan at a wedding, but that his hosts, a poor family, had most likely put very little of the class A drug in the pipe and it had little effect upon him.

The foreign secretary has also been asked whether he took drugs when he was younger. Hunt told the Times: “I think I had a cannabis lassi when I went backpacking through India ... That is almost as naughty as wheat fields”, he said, referring to Mrs May’s confession when asked the naughtiest thing she ever did.

In 2005, on Have I Got News For You, leadership favourite Johnson said: “I think I was once given cocaine, but I sneezed and so it did not go up my nose. In fact, I may have been doing icing sugar.”

Years later, he confirmed that he snorted cocaine and smoked “dope” as a teenager. –Guardian