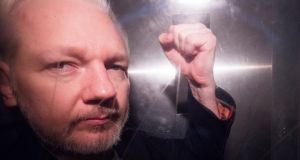 Julian Assange, the WikiLeaks leader, has been indicted on 17 new counts of violating the US’s espionage act for his role in publishing classified military and diplomatic documents in 2010, the US justice department announced on Thursday in a novel case that raises profound issues around the country’s first amendment of their constitution.

The new charges were part of a superseding indictment obtained by the Trump administration that significantly expanded the legal case against Mr Assange, who is already fighting extradition proceedings in London based on an earlier hacking-related count brought by federal prosecutors in northern Virginia.

The secret documents that Mr Assange published were provided by the former US army intelligence analyst Chelsea Manning, who was convicted at a court-martial in 2013 of leaking the records.

“Assange, Wikileaks affiliates and Manning shared the common objective to subvert lawful restrictions on classified information and to publicly disseminate it,” the indictment said.

In response to the indictment, WikiLeaks tweeted: “This is madness. It is the end of national security journalism and the first amendment.”

This is madness. It is the end of national security journalism and the first amendment. https://t.co/wlhsmsenFw

The justice department’s decision to pursue espionage act charges signals a dramatic escalation under president Donald Trump to crack down on leaks of classified information and aims squarely at first amendment protections for journalists.

The first amendment of the US constitution states: “Congress shall make no law ... abridging the freedom of speech, or of the press...”

Most recently, law enforcement officials charged a former intelligence analyst with giving classified documents to the Intercept, a US national security news website.

Legal scholars believe that prosecuting reporters over their work would violate the first amendment, but the prospect has not yet been tested in court because the government had never charged a journalist under the espionage act.

Though he is not a conventional journalist, much of what Mr Assange does at Wikileaks is difficult to distinguish in a legally meaningful way from what traditional news organisations do: seek and publish information that officials want to be secret, including classified national security matters, and take steps to protect the confidentiality of sources.

Mr Assange was secretly indicted in March 2018 in federal court in Alexandria, Virginia, on a charge of conspiring to commit unlawful computer intrusion.

Prosecutors accused Mr Assange of agreeing to help Ms Manning to crack an encoded portion of a passcode that would enabled her to log on to a classified military network.

Mr Assange was arrested in London in April after being dragged out of the Ecuadorean Embassy, where he had resided for years to avoid capture.

The US has asked the UK to extradite Mr Assange, who is fighting it. The Obama administration considered charging Mr Assange under the espionage act but never did out of concerns that such a case could chill traditional journalism. – New York Times, AP