May faces another showdown after Lords backs ‘meaningful vote’ amendment

The UK's upper chamber started a debate on June 18 over the final wording of the legislation for Brexit. One peer was heard heckling the words, "You are an idiot" as Conservative Lord Robathan accused Viscount Hailsham of sabotaging Brexit. 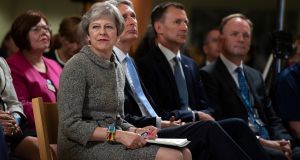 The British prime minister, Theresa May, with the chancellor of the exchequer, Philip Hammond, and the health secretary, Jeremy Hunt, ahead of delivering a speech at the Royal Free Hospital in London on Monday. Photograph: Will Oliver/EPA

Theresa May faces another showdown with pro-European Conservative MPs on Wednesday after the House of Lords approved an amendment that would give parliament a meaningful vote in the event of a no-deal Brexit.

Twenty-two Conservative peers voted against the government to back the amendment by 354 to 235, a bigger margin than in April when a similar amendment was debated.

During an unusually heated debate, former Conservative cabinet minister Douglas Hogg, now Viscount Hailsham, defended the rebels’ action in co-operating with other parties on amendments to the EU withdrawal Bill.

“We are the High Court of Parliament. We are not party hacks,” he said.

The House of Commons last week rejected a Lords amendment on the issue after the prime minister promised Tory rebels led by former attorney general Dominic Grieve that she would introduce an amendment in the Lords reflecting their concerns. Mr Grieve withdrew his own amendment and believed he had agreed the wording of a new amendment with the government last Thursday before ministers made a last-minute change.

The government’s amendment promised MPs a vote if Ms May failed to agree a Brexit deal by January 21st, 2019, but only on a neutral motion that could not be amended.

Lord Hailsham introduced an amendment based on the deal Mr Grieve was close to agreeing with the government last week, promising MPs a vote on a “motion to approve” in the event of a no-deal scenario. Conservative, pro-Brexit peer Nicholas True accused Lord Hailsham and Mr Grieve of seeking to use parliamentary stratagems to stop Britain leaving the EU.

“People outside are getting a little bit tired of the parliamentary games. They actually want to know when they are going to get Brexit, when it will be delivered and when it will be done,” he said.

The amendment will now return to the Commons on Wednesday and Labour’s shadow Brexit minister Matthew Pennycook said a defeat for the government there could finally take a no-deal Brexit off the table.

“Labour has always maintained that parliament should have the right to a genuinely meaningful vote on the terms of our exit from the EU. If the prime minister’s final Brexit deal is voted down, that cannot give her licence to crash the UK out of the EU without an agreement,” he said.

“MPs now face a decisive vote on Wednesday to guarantee parliament has a proper role in the Brexit negotiations and to take the threat of no deal off the table once and for all.”

The Liberal Democrats’ leader in the Lords, Dick Newby, said the prime minister should now acknowledge that she cannot avoid giving MPs a meaningful vote on the Brexit deal.

“If the Tories are still confident they can get a good Brexit deal, then they should be more than happy to give parliament this vote. Parliament must be able to decide amongst all the options – including giving the people a final say on the Brexit deal and a chance to exit from Brexit,” he said.