‘No deal’ Brexit would cost UK households over €1,000 a year

Whatever deal is struck with EU, costs will rise and profitability will fall, study finds 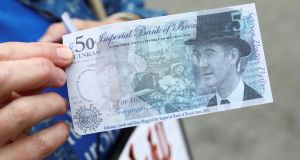 A “no deal” Brexit could cost UK households £1,000 (€1,142) a year, with the impact disproportionately felt by poorer households, according to new research.

The study by consultants Oliver Wyman suggests that whatever deal is struck with Brussels, UK household spending will rise and consumer businesses’ profitability will fall after Brexit.

Under a “no deal” Brexit scenario, where all imported goods from the EU were subject to World Trade Organization tariffs, the overall cost to households would be £27 billion a year, or nearly £1,000 per household.

“In a scenario where the UK reverted to WTO most-favoured-nation import tariffs, we expect the price of a typical weekly grocery shop to go up by £5.50, a family meal for four at a high street restaurant chain to increase by £9, and a pair of trainers to cost £6.75 more,” said Duncan Brewer, Oliver Wyman partner and author of the research.

The research modelled five of the most commonly discussed scenarios of an UK exit from the EU: a deal that left the UK out of the customs union but in the single market, and vice versa; one in which the UK achieved a bespoke customs and single market deal; and two in which the UK left the single market and customs union but, in one alternative, applied WTO tariffs to imports and, in the other, unilaterally decided to apply zero tariffs to imports.

It found that the annual average increase to household costs under the scenarios ranged from £245 to £961 annually. It also found that, for each 5 per cent that sterling devalued against the US dollar and the euro, household costs increased by a further £380 a year.

Any subsequent free trade deals, which allowed the UK to move to zero-tariff trade with all non-EU countries, would reduce costs by £120 to £170.

According to the research, worse-off households would see costs rise more than richer ones because they spend a higher proportion of their income after housing costs on groceries.

Wealthier households would be proportionally more affected by scenarios where labour costs would increase, since they spend more on services such as entertainment and hospitality.

“Cost increases on essentials like food and drink could create difficulties for many people in the UK, but the price changes won’t happen overnight,” said Mr Brewer.

“However, consumers’ pockets are not limitless and they will cut back on discretionary purchases like holidays and eating out, putting pressure on businesses like restaurants and travel agencies.”

Even a Brexit deal that avoided import tariffs could lead to significant increases in household costs because of the impact of non-tariff barriers and increased red tape, such as new border regulations, increased paperwork, and longer waits for custom checks.

The research found that the financial hit from additional red tape could be as high as the impact of new tariffs, ultimately costing households between £250 and £350 a year.

Consumer businesses also faced losses if they did not pass on higher costs to consumers, according to the research. Profit measured by earnings before interest, tax, depreciation and amortisation could drop between 1.1 and 4.2 per cent.

Companies that relied on imported goods, such as supermarkets, would be most affected by a Brexit scenario under which red tape and tariffs increased.

“It is possible that supermarkets’ profits will be wiped out unless they put prices up for shoppers,” Mr Brewer said.

Businesses that provided services, such as restaurants and hotels, were less reliant on imports and would be more protected from the impact of higher import tariffs and red tape.

However, Oliver Wyman suggested their profitability could be reduced by as much as a third if Brexit led to increased labour costs.

All the scenarios assumed that businesses would shift some of their sourcing after Brexit if it became cheaper to source goods from outside the EU.

Mark Essex, director at KPMG UK, predicted a “general reluctance” for consumers to make major purchasing decisions as March 2019 approached, but that Brexit would not affect all supermarkets, restaurants and retailers equally.

“There will be winners and losers and not just because some have prepared and some haven’t. It’s all a matter of where they source their goods,” he said.

The Oliver Wyman study differs from most research modelling the impact of Brexit on the UK economy because it quantified costs from the “bottom up” at each stage of the value chain.

Most other studies have been based on “top-down” scenarios looking mainly at macroeconomic variables.

Most notoriously, the Treasury forecast in April 2016 that a British exit from the EU would lower UK economic output 6.2 per cent by 2030, amounting to an annual cost to British households of £4,300 a year.

In March, the government was forced to publish its assessment of the economic impact of Brexit. It found that growth would be reduced over the next 15 years, whatever the result of Brexit negotiations. – Copyright The Financial Times Limited 2018