Socialist Sánchez has three weeks before new elections are called 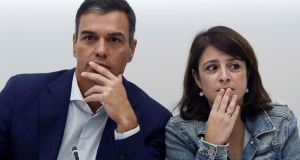 After months of political stalemate in Spain, Socialist leader Pedro Sánchez believes he can avert a fourth general election in as many years by forming a minority government before the end of September.

Mr Sánchez, the acting prime minister, won an election in April. But, lacking a parliamentary majority, he failed to win a July investiture vote to form a new administration. He now has until September 23rd to try to win another investiture vote otherwise a new election will be called for November.

“We don’t have to hold a repeat election,” Mr Sánchez told El País in an interview published on Sunday. “However difficult this crisis of governability is, I believe that getting out of the labyrinth will be straightforward.”

The main obstacle to his investiture in July was the Socialists’ failure to reach an agreement with the leftist Podemos party. Podemos wanted to form part of a coalition government, a proposal Mr Sánchez initially rejected. He also refused to have Podemos leader Pablo Iglesias in his cabinet, which further soured relations between the parties. Although the Socialists eventually agreed to allow Podemos into a coalition, the two parties could not agree on its formula.

With the Socialists and Podemos due to resume talks this week, the acting prime minister has apparently ruled out discussing the formation of a coalition. Instead, he hopes to create a less formal, left-leaning governing partnership similar to the one that Socialist António Costa has led in neighbouring Portugal since 2015.

As well as requiring the support of Podemos, the Socialists would probably need the backing of Basque nationalists and other leftist and regional parties in order to form a majority.

On Tuesday, Mr Sánchez is expected to present a raft of policies that he hopes will win over possible parliamentary allies and form the foundations of a new administration. The measures will reportedly place emphasis on the environment and gender equality.

Although the constitutional clock is ticking, Mr Iglesias appears to be in no hurry to negotiate. On Sunday, he posted on Twitter a video of Muhammad Ali defeating George Foreman in a 1974 heavyweight boxing match, above which the Podemos leader praised “the art of patience”. Many saw this as evidence that he will again take a tough line in talks with Mr Sánchez.

A poll published on Monday by El Mundo newspaper showed the Socialists benefitting in the event of a new election and being able to form a majority with the support of Podemos alone. The poll also showed the conservative Popular Party (PP) increasing its share of seats, with the right-of-centre Ciudadanos and far-right Vox both losing ground.

However, political developments are exerting pressure on Mr Sánchez to break the impasse and avoid leading the country into a new election. In October, the supreme court is expected to issue a verdict on the trial of 12 Catalan independence leaders, which could trigger social unrest in the northeast of the country. Also, with Brexit on the horizon, many Spanish businesses and expatriates are hoping for a stable government soon.