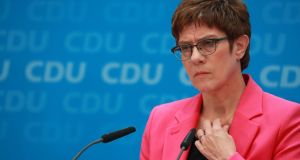 Annegret Kramp-Karrenbauer, leader of the Christian Democrat Union, at the CDU headquarters in Berlin on Monday. Photograph: Krisztian Bocsi/Bloomberg

The leader of Germany’s governing Christian Democratic Union (CDU) has ruled out any political co-operation with the far-right Alternative für Deutschland (AfD) after a surge in its support in two weekend elections.

The AfD success – it doubled its support in Brandenburg and tripled it in Saxony with 23.5 and 27.5 per cent of the votes respectively – placed the party second in both eastern states. Its success has reshuffled Germany’s coalition arithmetic for mainstream parties, making three- or even four-party alliances necessary to retain power.

Given such complications, CDU leader Annegret Kramp-Karrenbauer was asked on national television if her party could stand by its refusal to work with the AfD. “Yes we can,” she said, “we have laid that down in party committees.”

Saxon’s CDU state premier Michael Kretschmer agreed, saying he opposed working with the AfD because this clear pre-election demarcation “is why many non-voters and supporters from other parties voted CDU”.

The AfD’s weekend surge has revived discussion in the CDU about whether – with the Merkel era ending – the party is doing enough to appeal to right-wing conservative voters.

The decisive action on Monday was an attempt to close down discussion – in the Saxon CDU and beyond – over whether isolating the AfD in opposition helps the populist party by retaining its anti-establishment image.

Post-election analysis showed the CDU lost the equivalent of one fifth of its Saxon vote, and 27 per cent of its Brandenburg vote, to the AfD.

AfD co-leader Alexander Gauland predicted that difficult coalition talks ahead in Saxony and Brandenburg could force the CDU to yet change its mind. “Then the question will arise: is it not better to talk to the AfD?” he suggested.

The debate over how to tackle the AfD, and how to lure back conservatives into the CDU fold, overshadowed the CDU’s election campaign in Saxony.

On Monday Ms Kramp-Karrenbauer admitted that, in this debate, she “didn’t overcome hurdles as elegantly” as she should have.

After less than a year in office, marked by high-profile gaffes and plunging popularity, the CDU leader faces pressure to pivot right from a new conservative pressure group inside the CDU.

On Monday Daniel Günther, the state premier of Schleswig-Holstein, said the new leader had provided “no tailwind” to the regional election campaigns and contributed instead to “alarm signal” results.

“It’s now important to set clear points in terms of content,” he said. Without mentioning the CDU leader by name, he added: “If that succeeds, the criticism of those responsible will also be dispelled.”

With a third eastern state poll due next month, in Thuringia, the AfD is likely to build on its successful campaigns presenting itself as heir of Germany’s peaceful revolution of 1989.

Sunday’s disastrous votes for Germany’s junior coalition partner the SPD – down to less than 8 per cent in Brandenburg – will dominate this week’s first debate among candidates to lead that party.