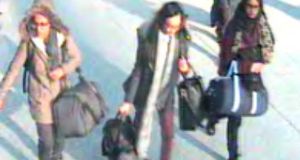 British teenagers Amira Abase, Kadiza Sultana and Shamima Begum (on right) at Gatwick Airport in London on February 23rd, 2015, the day they fled the UK to join Islamic State in Syria. Photograph:Ho/AFP/Getty Images

An east London schoolgirl who left Britain as a 15-year-old to join the Islamic State terror group is now heavily pregnant and wants to return home.

Shamima Begum was tracked down by the London Times to a refugee camp in northern Syria where she is now 19, the bride of an Islamic State fighter, nine months pregnant and has had two infant children who are dead. Her husband is in captivity.

Stating that “I don’t regret coming here”, she told the Times: “I’m not the same silly little 15-year-old schoolgirl who ran away from Bethnal Green four years ago.”

She also told the paper: “The caliphate is over. There was so much oppression and corruption that I don’t think they deserved victory. I know what everyone at home thinks of me as I have read all that was written about me online. But I just want to come home to have my child. That’s all I want right now. I’ll do anything required just to be able to come home and live quietly with my child.”

She was one of three schoolgirls – along with Kadiza Sultana and Amira Abase – from Bethnal Green Academy who left their homes and families in February 2015 to join a fourth Bethnal Green schoolgirl in Syria who had left London they year before. The Times reported that they each married a foreign fighter with Islamic State, also known as Isis.

Ms Sultana was reported to have been killed in an air strike on Raqqa in May 2016, while Ms Begum has recently heard second-hand from other people that Ms Abase, and the other schoolgirl who left Britain in 2014, may still be alive.

When she arrived, Ms Begum was put in a house where jihadist brides-to-be waited to be married, she said. She was married 10 days after arriving in Raqqa in 2015 to a Dutchman who had converted to Islam. She claims her husband was later arrested, charged with spying and tortured.

She left Raqqa in January 2017 with her husband but her children, a girl aged a year and nine months and a three-month-old boy, have both died in recent months. Her son had an unknown illness worsened by malnutrition, the Times said.

Ms Begum said she had a “mostly” a “normal life in Raqqa, every now and then bombing and stuff”.

She told the paper: “But when I saw my first severed head in a bin it didn’t faze me at all. It was from a captured fighter seized on the battlefield, an enemy of Islam. I thought only of what he would have done to a Muslim woman if he had the chance.”

She said her family had moved to Baghuz and she had left there two weeks ago along a 5km corridor east of the town. Her husband had surrendered to a group of Syrian fighters allied to the Syrian Democratic Forces (SDF) and she had not seen him sinces.

The British Home Office said it did not comment on individual cases, although anyone who returns to the UK after travelling to Islamic State territory faced criminal investigation, and stricter laws were now in place.

Security minister Ben Wallace said: “The UK advises against all travel to Syria and parts of Iraq. Anyone who does travel to these areas, for whatever reason, is putting themselves in considerable danger.

“Everyone who returns from taking part in the conflict in Syria or Iraq must expect to be investigated by the police to determine if they have committed criminal offences, and to ensure that they do not pose a threat to our national security.

“There are a range of terrorism offences where individuals can be convicted for crimes committed overseas and we can also use Temporary Exclusion Orders to control an individual’s return to the UK.”

“I’m not putting at risk British people’s lives to go and look for terrorists or former terrorists in a failed state – there’s consular services elsewhere in the region and the strong message this Government has given for many years is that actions have consequences,” he said.

Questioned on whether the fact that Begum was 15 when she ran away might generate sympathy from the Home Office, Wallace said: “People know what they’re getting into.

“This is a terrorist group, one of the worst ever in the world, that butchers people and has been responsible for the deaths of dozens of British citizens.”

Times war correspondent Anthony Loyd, who found Ms Begum, told Today she was “two things”: “She is the 15-year-old schoolgirl who was groomed and lured to the caliphate, and four years later, with that background, she is an indoctrinated jihadi bride.”

Loyd added: “She didn’t express regret, she said she had no regrets, she was calm and composed but she was also in a state of shock – she had just come out of a battlefield, nine months pregnant, many of her friends dead and she’s gone through air strikes and all the rest of it – so I wouldn’t want to rush to judge her too harshly.”

Tasnime Akunjee, a lawyer who was instructed by the Bethnal Green girls’ families after they ran away, said he was “glad [Ms Begum] is alive and safe”.

He said the authorities should be reminded of former Metropolitan Police Commissioner Bernard Hogan-Howe’s position at the time of their disappearance. “The position of the Metropolitan Police was that they should be treated as victims, so long as they hadn’t committed any further offences while they are out there,” he said.

Mr Akunjee said he had spoken to the girls’ families, who had “expressed the position that they want time and space to process what’s happened”.

Bethnal Green and Bow MP Rushanara Ali said: “At the time, when Shamima Begum and two other girls disappeared and it was feared they were heading for Syria via Turkey, I made representations to the then home secretary Theresa May and the head of counter-terrorism at the Metropolitan Police.

“I appealed to them to work with the Turkish authorities to prevent the girls from crossing the border into Syria. Unfortunately, despite the efforts of the UK authorities, the girls did get into Syria and as subsequent reports suggest, they joined [Islamic State]\.

“If it is the case that Shamima Begum is trying to return to the UK, it is now a matter for the UK police, security services and the Foreign Office, who will rightly need to consider public safety and our national security in cases such as these.”

Of the other two schoolgirls from Bethnal Green academy who flew from Gatwick to Istanbul on 17 February 2015, Kadiza Sultana is reported to have died in an airstrike on Raqqa, the former capital of Isis’s territory.