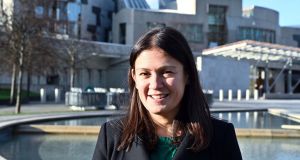 Labour’s shadow foreign secretary Lisa Nandy: 'There’s a real need for Labour to . . . make the case for how we’re going to bring different parts of the country together.'

The protective metal boards surrounding Winston Churchill’s statue in Parliament Square came down this week ahead of French president Emmanuel Macron’s visit to London to mark a wartime anniversary. But the debate over Britain’s public monuments is not over and Oxford’s Oriel College said this week that it would move a statue of 19th-century imperialist Cecil Rhodes from its front entrance.

Boris Johnson said on Monday that instead of taking down controversial statues, Britain should put up new ones, pointing to empty plinths in the courtyard of the foreign and commonwealth office that were waiting to be occupied by contemporary heroes. Labour’s shadow foreign secretary Lisa Nandy suggested that it was time to take a look at the art inside that building, notably a series of murals by Sigismund Goetze celebrating the expansion of the British Empire, one of which depicts Africa as a small naked boy carrying a basket of fruit.

“As we leave the European Union and start to reach out to other parts of the world, those relationships become incredibly important to us, particularly relationships with Commonwealth countries and countries that were part of the empire,” Nandy said in a Zoom interview from her home in Wigan this week.

“There is a very mixed legacy across the world for Britain in relation to that. And some of the works of art on display at the foreign office do not project the sort of relationship and the high esteem in which we hold those countries. And they depict many of those former empire countries as bending at the knee of the mighty British Empire, when what we seek in modern times is a partnership with those countries based on their strengths, assets and attributes and our own as well.”

Nandy’s family background embraces two sides of the legacy of the British Empire. Her father was Dipak Nandy, a Marxist academic who moved to Britain from Kolkata and helped to draft the Race Relations Act in 1976. Her mother Louise Byers, who was the daughter of Liberal MP Frank Byers, worked as a TV current affairs producer.

The MP for Wigan since 2010, Nandy served in the shadow cabinet under Ed Miliband and Jeremy Corbyn but she resigned from Corbyn’s team in 2016 and backed Owen Smith’s unsuccessful leadership challenge. She ran for the leadership this year, coming third behind Keir Starmer and Rebecca Long-Bailey.

The campaign enhanced Nandy’s reputation, however, as she outperformed her rivals in TV interviews and revealed herself to be a more complex politician than many Labour members had known. For the past few years, Nandy has been associated with efforts to keep Labour connected to its traditional heartlands outside London, championing the interests of towns and opposing the push for a second Brexit referendum.

She lost the argument within the party before the election when she was calling for Labour to join forces with moderate Conservatives to back a soft Brexit deal. But she is now in the mainstream alongside Labour leader Starmer in accepting that the central Brexit argument is over and refusing to press the government to extend the transition period beyond the end of this year.

“We’ve been smashed apart in the Labour Party over Brexit. Not just our electoral coalition, but our party membership, our members of parliament as well over the last four years. But we’re now in a position where we saw the entire Labour base collapse beneath our feet in many of those parts of the country that voted to leave and that had traditionally voted Labour through three successive generations,” she said.

“I think there’s now a recognition right across the Labour movement that we’ve got to get a deal by the end of the year. And we’ve also got to stand up for those very close, deep relationships with the EU as a whole and with individual countries within the European Union more generally.”

Nandy says that Labour’s foreign policy will not change in its essentials and the party will remain internationalist in outlook with a commitment to human rights and the rule of law. But she has adopted a tougher stance on China, finding common cause with some Conservative MPs in questioning the role of Chinese companies like Huawei in British infrastructure.

“We think you need a twin-pillar strategy in relation to China. On the one hand, you need the strategic independence by investing in homegrown industry and by building those alliances overseas to give us a degree of detachment that allows us to speak and act from a position of values,” she said.

“But equally, you need a level of constructive engagement with China. There is no global challenge that can be solved without the involvement of the Chinese government, whether it’s Covid-19, climate change or the issues in the world economy, reform of our major institutions. China remains a very, very important partner for the world. Often the situation with the US and China is likened to the cold war. We believe it isn’t at all. It’s far more complex than the cold war and we’ve got to maintain those links.”

Labour has remained part of the Party of European Socialists and Nandy believes the party can learn from the experience of other centre-left parties. She suggests that most such parties have faced the same challenge of trying to keep together two parts of an electoral coalition that have experienced globalisation very differently.

Although she recognises how steep Labour’s challenge is, she draws some hope from the fact that the party under Starmer recognises that it must move beyond what she calls the “one more heave” mentality.

“There’s a sort of mythology on the left around and around our history in Britain, that after the war the country realised that this was a huge moment when things had to change and we were propelled to power where we built the institutions, the NHS and the welfare state that have lasted to this day. Now, that is true but what we forget is that six years later, we were out of power and we’ve largely been in retreat, trying to defend those institutions ever since.

“So there’s a real need for Labour to go out into the country and start to make the case for how we’re going to bring different parts of the country together, particularly with the length and depth of the recession that’s about to hit,” she said.

“I think that is likely to be concentrated in many of those areas that already lacked the resilience before. So coastal towns, which are heavily reliant on the tourism industry, are likely to see a disproportionate impact. And we’ve got a lot of ex-industrial towns where the last Labour government used the public sector to try to kickstart the economy. And as the public sector is contracted, that’s left us with a real problem.

“The other jobs that exist in those places are not well-paid, white-collar jobs. They’re the insecure agency jobs. So for all of those reasons, the parts of the country that we’re seeking to win back at the next election are going to feel the impact of this economic recession harder. And we’ve got to make sure that we are their champion.”