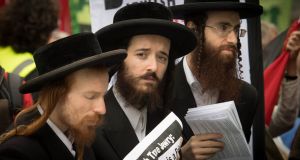 Labour’s governing body has agreed to adopt an international definition of anti-Semitism after months of controversy, along with a statement that it will not undermine freedom of expression on Israel or the rights of Palestinians.

At the end of a four-hour meeting at which party leader Jeremy Corbyn was present, the National Executive Committee (NEC) said it would adopt the International Holocaust Remembrance Alliance’s (IHRA) definition, including all 11 examples.

“We recommend that we adopt the IHRA in full, with all examples. This does not in any way undermine the freedom of expression on Israel or the rights of Palestinians. We re-invite organisations to engage in consultation on the Code of Conduct,” said the NEC.

According to reports of the meeting, Mr Corbyn sought to persuade the committee to include a stronger statement clarifying that it should not be considered anti-Semitic to describe Israel, its policies or the circumstances around its foundation as racist.

Such a statement would have stood in apparent contradiction to one of the examples in the IHRA definition, denying the Jewish people’s right to self-determination by “claiming that the existence of a State of Israel is a racist endeavour”.

The board of deputies of British Jews welcomed the decision. But its president, Marie van der Zyl, said Labour would have to do more to persuade Jews that the party is serious about tackling anti-Semitism.

“It is very long overdue and regrettable that Labour has wasted a whole summer trying to dictate to Jews what constitutes offence against us. However the adoption of the internationally-recognised definition by itself, can only be the beginning. Action is what matters,” she said.

Jewish groups have complained for months that Labour was not doing enough to combat anti-Semitism within its membership and have been calling since July for the party to adopt the full IHRA definition. Palestinian activists in Britain have warned that the definition is so broad and its examples so expansive that it could silence legitimate criticism of Israel.