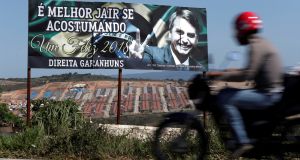 On the eve of Brazil’rs last presidential election in 2014, news suddenly started spreading online and across WhatsApp that a key informant in the Petrobras corruption case had been murdered in prison.

The reported death of Alberto Youssef was fake news and clearly designed to derail the re-election of embattled incumbent Dilma Rousseff. It failed, but the malicious rumour marked a final low point in the South American country’s dirtiest election campaign in a quarter century. Now, as the country gets ready to go to the polls in little over a month to elect a new president and Congress, fake news is once again contaminating Brazil’s electoral process.

In recent weeks, many voters have received messages such as the one claiming a notorious murderer was a congressional candidate for Rousseff’s Workers Party, just one lie in a universe of sometimes crude, sometimes sophisticated disinformation targeting voters on Facebook, Twitter, WhatsApp and other social networks and messaging apps.

A deeply ingrained distrust of Brazil’s political class means such fake news has an advantage over truth. “We Brazilians are more accustomed to doubt politicians than the media or something someone in our family has forwarded on to us. We have to broaden the extent of our scepticism, so it includes not just politicians but also these other things we now receive,” notes journalist Cristina Tardáguila, who is director of Agência Lupa, Brazil’s oldest fact-checking service.

In an effort to better face the challenge posed by this digital threat to democracy, Brazil’s civil society has got organised. Tardáguila’s Agência Lupa is now joined by a host of other media organisations, both majors and established independents, who have set up fact-checking services that allow voters to send through rumours they have received for verification.

“The risk posed by fake news has diminished because the media has mobilised to create mechanisms to check these rumours, as didn’t happen in 2014,” says Marco Teixeira, a political scientist.

Brazil electoral courts charged with overseeing the integrity of the vote have also mobilised against the phenomenon, getting most political parties to commit to not producing fake news themselves in an effort to restrict its creation to independent partisans or pranksters. Last week, supreme court minister Luiz Fux said that electoral law allowed for fines or the banning of those whose candidacy benefited from “informational pollution”.

Part of the concern with policing electoral content online is due to the rising challenge the internet poses to the traditional heavyweight when it came to deciding Brazilian elections: television. This Friday, the country will test its continuing power in the face of the internet when the presidential candidates start appearing on the daily political broadcasts all TV networks must carry.

The start of the TV campaign would traditionally mean a boost for Geraldo Alckmin. The amount of time each candidate gets is based on the amount of seats the parties backing them hold in the lower house of congress, and the former São Paulo governor’s imposing coalition means he will have by far the largest block of time, double that of the next biggest, jailed former president Luiz Inácio Lula da Silva.

If traditional patterns hold, Alckmin, a notoriously dull politician who has been stuck in single figures in the polls for months, should receive a boost once the TV campaign gets under way, propelling him into contention.

Inversely, the start of political broadcasts would normally signal the beginning of the end of Jair Bolsonaro’s hopes of becoming president.

The far-right former military officer, whose racist, misogynistic and homophobic views meant he had difficulties attracting allies, will have just eight seconds to sell himself to TV viewers each night, compared to Alckmin’s five minutes and 32 seconds.

But it is Bolsonaro who is currently riding high in the polls, in part thanks to his skilled use of social networks to bypass the traditional gatekeepers of Brazilian media. His tally of 5.5 million followers on Facebook dwarfs Alckmin’s page, which does not even have 1 million.

“I think the political class and their marketing gurus have been slow in developing effective online campaigns and they could come to regret this later,” says Antonio Lavareda, a veteran of more than 90 political campaigns. “Bolsonaro dominates on social media and is the only candidate who is executing an effective campaign on social networks.”

So sure of his strategy of reaching out to voters through the unmediated means of social networks and WhatsApp is he that Bolsonaro has even threatened not to participate in future televised debates.

But if Alckmin is betting heavily on television, Bolsonaro might yet come up short betting against it. Only 65 per cent of Brazil’s population is connected to the internet, and while television audiences have declined, the major networks enjoy far greater audience share than their peers in the US.

“Because of social networks Bolsonaro will not be reduced to dust once the TV campaign starts. But it is also credible to suppose that he will not maintain the support he enjoys today with so little time on television and radio,” argues campaign veteran Lavareda.

Brazil’s political and financial establishment is now nervously waiting to see whether Alckmin gets the traditional TV bump. If it fails to materialise, the likelihood that an authoritarian adventurer will represent the right in a probable run-off round will increase.

Such a success for Bolsonaro would have profound implications for how Brazilian elections are fought in the future and the role of social media regarding them. But it would be wrong to write off television even if Alckmin’s candidacy bombs, despite his huge hoard of TV time.

“Alckmin will be blamed, not the decline of television,” believes political scientist Teixeira. “He comes into the race with significant failures on his resumé, especially his presidential bid in 2006. In Brazil, politics is highly personalised. Failure will always be attributed to the candidate.”