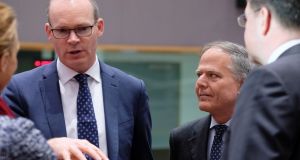 Proposals put forward by the British Labour party leader for a deal on Brexit would be welcomed by Brussels, Tánaiste and Minister for Foreign Affairs Simon Coveney said on Monday.

But such proposals must come from London and could not be tabled by the EU, he insisted.

“The EU is very open to that solution if the UK will actually pursue it,” he said. “But the onus has to be on London. ...the logjam and problems are in London and the solutions have to come out of London.

“We can’t put things to the British government that they don’t want...”

Mr Corbyn has proposed that the UK sign up to permanent membership of the Customs Union and a substantial part of the single market. He wants British negotiators then to seek a mechanism to allow a British say in future EU trade negotiations.

Westminster observers say such a solution could potentially command a Commons majority but it remains deeply anathema to Mrs May who believes it would split her party irrevocably. In Brussels, many believe that the Corbyn option remains the only viable route out of the impasse to avoid a no-deal departure.

Mr Coveney said he did not believe it would be possible to solve the backstop issue with legally-binding language outside the withdrawal agreement as reportedly suggested by Mr Cox. “That is essentially saying that you take the backstop out of the WA. That’s not going to happen...”

He said Mr Barnier and the EU remained adamantly opposed to any reopening of the withdrawal agreement (WA). “It’s important UK doesn’t raise expectations in Westminster that there is a redrafting of the WA possible.... I don’t know how many times we will have to say it but eventually people in London will listen and see that the EU is serious.”

But he remained hopeful that “in the next couple of days we’ll see that change.”

On the Corbyn proposals, Mr Coveney told The Irish Times that “whether the British government wants to listen to that approach is a very different question but I think they know it’s there and certainly Michel Barnier has suggested that that is an approach that could deal with the concerns around the backstop ever being used.

“But of course the truth is that the Conservative Party has lots of other concerns too and so if it was only about the backstop that change in approach to the future relationship might solve the problem,” he said.