Johnson tells SNP leader he will not agree to independence referendum 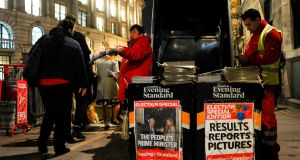 Copies of the London Evening Standard on Friday, with the front page reporting on the election victory of Boris Johnson’s Conservative Party in the general election. Photograph: Daniel Sorabji/AFP via Getty Images

Boris Johnson has pre-empted a demand from Scotland’s first minister Nicola Sturgeon for a second independence referendum by telling her he will not agree to it. In a phone call on Friday evening, the prime minister told the SNP leader that he had an “unwavering commitment” to strengthening the union.

“The prime minister made clear how he remained opposed to a second independence referendum, standing with the majority of people in Scotland who do not want to return to division and uncertainty. He added how the result of the 2014 referendum was decisive and should be respected,” a Downing Street spokesperson said.

Ms Sturgeon has claimed the SNP’s success in winning 48 out of Scotland’s 59 seats as a mandate for a second referendum vote. She said she would publish next week a “detailed democratic case” for Mr Johnson to transfer to Edinburgh the legal authority to call a second referendum. Any such referendum currently requires parliamentary authorisation from Westminster and Edinburgh.

“This isn’t about asking Boris Johnson or any other Westminster politician for permission. This is instead an assertion of the democratic right of the people of Scotland to determine our own future,” Ms Sturgeon said.

Speaking outside Downing Street after visiting Queen Elizabeth, Mr Johnson said his government had won an overwhelming mandate to take Britain out of the EU on January 31st. But addressing voters who oppose Brexit, he struck a conciliatory tone and called for national healing after the divisions of the past three years.

“I want you to know that we in this One Nation conservative government will never ignore your good and positive feelings of warmth and sympathy towards the other nations of Europe. Because now is the moment, precisely as we leave the EU, to let those natural feelings find renewed expression in building a new partnership, which is one of the great projects for next year,” he said.

“And as we work together with the EU as friends and sovereign equals in tackling climate change and terrorism in building academic and scientific cooperation, redoubling our trading relationship, I frankly urge everyone on either side of what after 3½ years after all an increasingly arid argument I urge everyone to find closure and to let the healing begin.”

Donald Trump tweeted his congratulations to Mr Johnson, saying that Britain and the US were now free to strike a “massive new trade deal” that “has the potential to be far bigger and more lucrative than any deal that could be made with the EU”. The prime minister spoke by phone on Friday evening to Germany’s chancellor Angela Merkel and to Taoiseach Leo Varadkar, who congratulated him on his victory.

“In relation to Northern Ireland, the prime minister made clear that his top priority is the restoration of a functioning Executive as soon as possible. He said that the Secretary of State for Northern Ireland, Julian Smith, will dedicate himself to a talks process to ensure the devolved institutions are restored,” a Downing Street spokesperson said.