What next for Nigel Dodds? 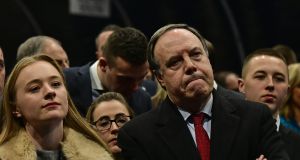 DUP’s Nigel Dodds: “we” will continue to work with the British government “in the days ahead”. Photograph: Colm Lenaghan/Pacemaker

What now for Nigel Dodds, the deputy DUP leader who lost his seat in North Belfast to Sinn Féin’s John Finucane?

Nelson McCausland, a veteran DUP politician who also lost a seat in North Belfast when he was an Assembly member in 2017, said the now ex-MP should be given space to reflect on the way forward.

“I think he would be a great loss to unionism and to Northern Ireland,” McCausland told BBC Radio Ulster.

And nobody can gainsay that. Dodds, a 61-year-old Cambridge law graduate, has been a central figure in the DUP going back to the days when he was the late Ian Paisley’s bag carrier in Europe, going on to his ministerial role in the first Northern Executive, and his part in the expansion of the DUP and the usurpation of the former main unionist body, the Ulster Unionist Party.

Losing North Belfast was a totemic moment for Dodds, for the DUP and for unionism. But he won’t have too long to nurse his wounds if he intends to rejoin the brutal battle of politics.

The negotiations to restore Stormont are to start on Monday and DUP leader Arlene Foster said she will be at them leading her party. Over the weekend, Dodds must decide if he will be at her side.

He took his defeat well, congratulating John Finucane from the rostrum in the count centre at the Titanic Exhibition Centre early on Friday morning.

He repeated his opposition to Boris Johnson’s Brexit deal and said the DUP wanted a Brexit that “protects the integrity of the United Kingdom and is the best thing for Northern Ireland”.

Tellingly, he also said “we” will continue to work with the British government “in the days ahead”.

That pronoun denoted a politician at least willing to face down this moment of adversity. And in case of any doubt about the matter he added, “I look forward to continuing to serve in whatever capacity the people see fit going forward.”

Unless he falls into a trough of despair over this weekend then it would appear that Dodds isn’t yet for quitting politics.

So, where would he go? Well there is one obvious constituency that would suit him well. Carla Lockhart, an Assembly member for Upper Bann, was elected as MP for that constituency.

She will need to be replaced and Dodds would seem a very obvious colleague to be co-opted to the constituency, which includes Banbridge where his family live.

Every cloud has a silver lining, they say. It’s not inconceivable that if the talks actually lead to the restoration of Stormont that Dodds could return as a Northern Executive minister. But does he still have the stomach for the fray?