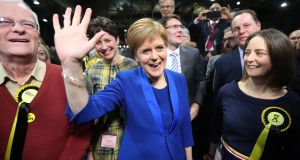 Scottish National Party’s Nicola Sturgeon: “Boris Johnson has a mandate to take England out of the EU but he must accept that I have a mandate to give Scotland a choice for an alternative future.” Photograph: Andrew Milligan

Five years after the Scottish people voted by 55 per cent to 45 per cent to reject independence, Ms Sturgeon said the election result “renews, reinforces and strengthens” the mandate for another vote on independence and promised to publish a blueprint for preparing a path to a second vote.

Boris Johnson, fresh from his own landslide in England and Wales on a promise to take the UK out of the EU, had “no right” to block another independence referendum, she said.

The SNP won 48 of Scotland’s 59 seats at Westminster – a gain of 13 seats on 2017 – but fell short of the 53 the party won in the 2015 general election. The party still scored a historic result by winning all seven constituencies in Glasgow, a city that a decade ago was regarded as an impenetrable Labour stronghold.

The SNP leader said that, following the election result, the Scottish government would next week publish “a detailed democratic case for a transfer of power to enable a referendum to be put beyond legal challenge”.

“This is not about asking Boris Johnson or any other Westminster politician for permission; it is instead an assertion of the democratic right of the people of Scotland to determine our own future,” she said in a victory speech in Edinburgh.

The party was among the election’s big winners as the Scottish nationalists increased their vote by strongly opposing Brexit, which was rejected by 62 per cent of Scottish voters in the 2016 referendum.

Victory brought one of the biggest political casualties of the night as the SNP’s 27-year-old candidate Amy Callaghan beat the 39-year-old Liberal Democrat leader Jo Swinson by 149 votes in East Dunbartonshire.

Ms Sturgeon was caught on camera cheering wildly in an image that captured the SNP’s electoral success on results night.

The Conservative vote in Scotland fell by three points to 25 per cent, while Labour shed 8.5 points to 18.6 per cent, suffering heavy losses in line with almost all of the rest of the UK, with the exception of London.

The Liberal Democrats increased their Scottish vote by 2.8 points to 9.5 per cent, despite losing their leader. They won four seats, the same number they won in 2017.

Ms Sturgeon described the election result as “exceptional” for the party, exceeding her expectations.

“Scotland has sent a very clear message: we don’t want a Boris Johnson Conservative government. We don’t want to leave the European Union and we want Scotland’s future to be in Scotland’s hands,” she said.

“That is the message of this election in Scotland tonight.”

The SNP’s gains came at a cost to the Tories, who lost seven seats in Scotland, and Labour, which lost six. Labour’s Ian Murray held on to his seat in Edinburgh South, leaving him as the party’s only MP in Scotland.

The SNP’s Stephen Gethins lost to the Liberal Democrats in the UK’s tightest marginal seat, Fife North East, which Mr Gethins won by just two votes in the 2017 general election.

Referring to Mr Johnson’s 80-seat majority at Westminster, Ms Sturgeon described the results across the UK as “grim” but said they underlined the importance of Scotland having a choice on its future.

“Boris Johnson has a mandate to take England out of the EU but he must accept that I have a mandate to give Scotland a choice for an alternative future,” she said.

The election delivered gains for anti-Brexit parties in Scotland and Northern Ireland that will create an early headache for Mr Johnson’s Conservatives as he attempts to heal a country divided over Brexit while he uses his strong electoral mandate to push for the UK’s departure from the EU as promised by January 31st.

The results in Scotland pave the way for an acrimonious constitutional dispute between the Scottish nationalists and the Tory government at Westminster over another breakaway poll.

While Scotland might have overwhelmingly rejected Brexit 3½ years ago, polls have shown the country to be more divided on independence. Northeast Scotland, which strongly favoured Brexit, and the south of Scotland stuck with the Conservatives in the election.

Michael Gove, a member of Mr Johnson’s cabinet, poured cold water on the idea of another referendum.