The Irish Times view on the British election: a country coming apart 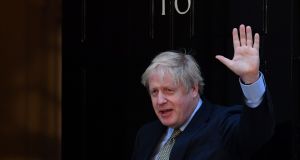 What Boris Johnson does with his power – and whether his big majority produces a shift in his approach – are questions that now move centre-stage. Photograph: Ben Stansall/AFP via Getty Images

The UK today has the same prime minister it had last week and the same ruling party it has had for almost a decade. The biggest issue facing the country – Brexit – will be concluded as planned, with the passing of Boris Johnson’s withdrawal deal allowing for the UK’s departure from the EU on January 31st. But that superficial sense of continuity belies the dramatic rupture that is now under way.

That’s most obvious on the electoral map of Britain – vast swathes of blue broken up by isolated pockets of red in urban areas. The red wall was made of clay. A rout of the Labour Party in some of its industrial heartlands in the midlands and the north of England is an historic shift which, taken alongside the Scottish National Party’s hegemony north of the border, raises alarming questions for the British left about its long-term ability to form a ruling majority.

British Labour is facing the same challenges that social democratic parties across Europe are having to contend with. On top of that, the need to keep both its Remain and Leave voters on board came at the cost of coherence. But claims by supporters of Jeremy Corbyn that the party’s failure was down to Brexit alone only tells part of the story. Corbyn was deeply unpopular and painfully ill-equipped to lead a major party. Against a government that had presided over three years of chaos and turmoil, his own failings ensured that even his popular ideas could not cut through.

Some cling to the hope that Johnson, freed from reliance on the radical Eurosceptic right, might pursue a softer Brexit, perhaps by having Britain remain in the EU customs union. That’s wishful thinking. The radical right has not been sidelined in the Conservative Party; it has taken over the Conservative Party. Yet while the Brexit endgame, if far from locked down, today looks clearer – much to the relief of Dublin and other European capitals – Johnson’s parliamentary party will now include a clutch of MPs whose constituents have social and economic needs and expectations that the government cannot meet without changing course in key policy areas. That will be one of the recurring tensions of the next five years.

It was, Johnson said, an election result that would “bring our nation together”. That’s hardly true even of Johnson’s own nation, England, which remains bitterly divided over Brexit. But more broadly, the very idea of the United Kingdom as a multi-national state is now in doubt. The SNP’s surge in Scotland, the march of English nationalism and the election of more nationalist than unionist MPs in Northern Ireland all point to the fragility of a union that now looks in real peril. That may well be what is most significant about Thursday’s vote. Boris Johnson and his fellow Brexiteers have united their party, but their country is slowly breaking apart.