Johnson rules out inquiry into lockdown breaches by Cummings 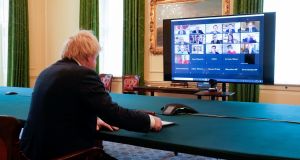 Boris Johnson has ruled out an inquiry into Dominic Cummings’s apparent breaches of lockdown rules as the number of Conservative MPs calling publicly for his chief adviser to be sacked reached 44.

The British prime minister told the House of Commons liaison committee that Mr Cummings had shown him evidence that his account of his trip from London to Durham during lockdown was accurate. But he has not shared that evidence with cabinet secretary Mark Sedwill and dismissed calls for an inquiry into Mr Cummings’s actions.

“Quite frankly, I am not certain that right now an inquiry into that matter is a very good use of official time,” he said. ”We are working flat out on coronavirus.”

Mr Johnson said the story had become the subject of a “political ding-dong” and he rejected the accusation that Mr Cummings had undermined the government’s moral authority in dealing with the crisis.

“I, of course, am deeply sorry for all the hurt and pain and anxiety that people have been going through throughout this period – this country has been going through a, frankly, most difficult time. We are asking people to do quite exceptionally tough things, separating them from their families,” he said.

While the prime minister was speaking, Clacton MP Giles Watling tweeted that Mr Cummings had become an unwanted distraction and that he must step down. Almost one in eight Conservative MPs have now called for Mr Cummings to go and many others have written to constituents criticising his actions.

Paymaster general Penny Mordaunt stopped short of calling for Mr Cummings to go but she told constituents that the controversy had undermined public health messages.

“I understand there may have been other issues which would have made other options to care for his child in London impossible. What is clear is that the scenes of the last few days will have undermined key public health messages. I deeply regret this and am very sorry for it,” she said.

Former chancellor of the exchequer Sajid Javid, who resigned rather than allow Mr Cummings to choose his special advisers, said the journey to Durham was neither necessary nor justified.

“The tremendous spirit in the face of adversity demonstrated by the public throughout this crisis has been sustained by an understanding that we are in this together and no one is above the law. It is essential, therefore, that the rules are equally and consistently applied – regardless of status or privilege,” he said.

The prime minister announced that Britain will launch a contact tracing system on Thursday that will require people who have had close contact with someone infected with coronavirus to self-isolate for 14 days. He said the system would not be mandatory at first but warned that sanctions could be introduced if those identified by contact tracers do not comply.

“If they don’t, we will consider what sanctions may be necessary, financial sanctions fines or whatever,” he said.