Q&A: What are the main stumbling blocks, and how will the plan affect Ireland? 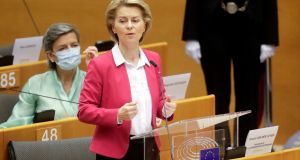 The European Commission has laid out plans for massive investments aimed at counteracting the damage of the coronavirus pandemic, while also modernising economies and shifting them away from fossil fuels, and ironing out imbalances in the European Union.

The proposals have been hailed as a historic moment by some, as they involve borrowing by the EU’s executive body to fund spending by member states, seen as a step forward in European integration.

But the plan must be approved by national leaders and by the European Parliament, and an aspect of it must be ratified by national parliaments as well. Long rounds of negotiations are expected to lie ahead.

There are two main parts to the commission’s proposal. The first is a joint EU budget of €1.1 trillion. The EU budget must be agreed every seven years and was already overdue, as it needs to come into force in 2021. It had been held up by disagreements over its financing and breakdown.

The second is a recovery programme. This has been described as a “once-off” response to the coronavirus pandemic, which has triggered an economic slowdown feared to be the worst in a century.

The commission has proposed €500 billion in grants and €250 billion in loans for member states for this.

If the recovery programme is approved, it would represent a significant change for the EU because it would involve borrowing by the commission that is jointly guaranteed by member states. If it doesn’t get paid back, the member states are on the hook for the debt.

That kind of shared debt is a step towards further integration, and is seen by some economists as a measure that could smooth out economic imbalances in the euro zone that have led to crises in the past.

For the plan, the commission has asked to be allowed to borrow up to 2 per cent of the EU’s total gross national income on financial markets. This would need to be approved by votes in all 27 national parliaments of the EU, potentially a difficult task.

The provision of the grants to member states is also a sea change from the EU bailout era. Unlike loans that must be repaid with interest and are tied to requirements for reforms, the grants do not need to be paid back by member states.

How will grants be given to member states?

The money would not be automatically given out. Governments would need to apply for grants to pay for specific investments or reforms.

The commission would check the applications to see if they help achieve common EU goals, such as cutting emissions or digitalising the economy, and will issue the money if so.

The total amount of grant money member states can apply for will depend on a calculation based on how badly their economy was affected by the coronavirus pandemic, and how able they are to respond to the damage on their own.

The largest amounts will be available to the countries needing the most help: €81.8 billion for Italy and €77.3 billion for Spain. The Republic is earmarked the relatively small amount of €1.91 billion.

How will the borrowing be paid back?

The commission has proposed that it should be allowed to raise money itself to pay back the borrowing.

It has suggested it could do this through taxes designed to pursue its political aims of more equitable taxation and combating climate change. It has laid out ideas for a tax on imports into the EU based on the carbon emissions involved in their production, a digital tax, or a tax on large companies.

Other ideas such as a tax on plastics have been floated in the past.

If member states do not agree to this, the debts could be repaid through their contributions to the common EU budget.

What are the Republic’s priorities?

The Irish Government has welcomed the announcement of the recovery plan and said that help needs to start flowing quickly to the countries that need it most.

But there may be issues of contention lurking in the details of the programme, as well as in the joint EU budget. The State has strongly opposed any move towards a digital tax or common corporate taxation levels in the past, and will be alert to any proposals to repay the borrowing through these.

When it comes to the budget, a top priority is to ensure that subsidies for farmers under the Common Agricultural Policy are not cut.

The proposal requires unanimous approval by the European Council, which is made up of the leaders of national governments.

Opposition is expected from the so-called “frugal four” of Austria, Denmark, the Netherlands, and Sweden, who strongly opposed jointly guaranteed debt in the past and have pushed for loans that oblige member states to implement economic reforms.  A Dutch diplomat told The Irish Times their position remained “far apart” from that of the commission, but welcomed a proposal to make access to EU funds contingent on upholding the rule of law – a reaction to concern about the erosion of democratic norms in countries such as Poland and Hungary.

The European Council is set to meet on June 19th. The leaders hope to be able to meet in person rather than over video conference if travel restrictions allow it, because in-person negotiations are viewed as essential to broach the differences between member states.