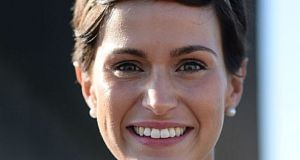 Fine Gael MEPs have been criticised after they voted against a resolution to step up search and rescue for refugees in the Mediterranean.

The European Parliament rejected the vote asking member states to step up efforts to save asylum seekers making the perilous crossing on Thursday. And All of Fine Gael’s MEPs – Mairead McGuinness, Maria Walsh, Frances Fitzgerald and Sean Kelly – voted against the resolution, which lost by two.

Ms Anderson said the European Parliament failed to commit to protecting human life in the Mediterranean.

“The motion fell by two votes, further adding to a damning record of the EU on the deepening humanitarian crisis,” she said

“It is a matter of deep shame that four Fine Gael MEPs actively voted to maintain a ‘fortress Europe’ status quo that has seen thousands of men, women and children drown simply for seeking sanctuary.

“While Fine Gael wax lyrical about the ‘four freedoms’ of the EU, including the freedom of movement, they are ready to side with their right-wing EU colleagues to ensure these values don’t extend to those fleeing destitution, war and persecution.”

Following the contentious vote Fine Gael MEP Maria Walsh said: “In the short term, the EU and member states must allocate more resources to search and rescue and increase missions to save more lives. We also need to urgently step up the fight against the organised criminals and human traffickers who profit on the vulnerable.

“The resolution rejected by the European Parliament today does the opposite by calling for Frontex, the European border and coast guard agency, to share intelligence about its operational activities with every boat in the Mediterranean. That would endanger more lives by facilitating, instead of dismantling, the business models of smugglers and human traffickers. We could not support that.”

Ms Walsh added that she was speaking on behalf of her fellow Fine Gael MEPs Seán Kelly, Mairead McGuinness and Frances Fitzgerald.

There have been 1,078 recorded drownings in the Mediterranean in 2019, according to the Missing Migrants Project, which tracks the deaths of migrants, including refugees and asylum seekers, who have gone missing along mixed migration routes worldwide.

The vote was held just one day after 39 Chinese nationals were found dead in a lorry in Essex, believed to have been smuggled into the UK. – PA