Irish-owned truck pulled trailer in which 39 bodies were found

A murder investigation has begun after 39 bodies were found inside a container on a Bulgarian-registered lorry at an industrial estate in Essex in southern England. 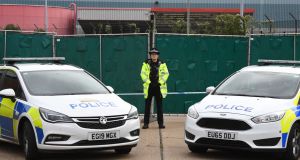 A police cordon at the road leading to the Waterglade Industrial Park in Grays, Essex, after 39 bodies were found inside a lorry container. Photograph: Stefan Rousseau/PA Wire 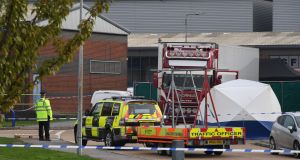 Police at the Waterglade Industrial Park in Grays, Essex, after 39 bodies were found inside a lorry container. Photograph: Stefan Rousseau/PA Wire 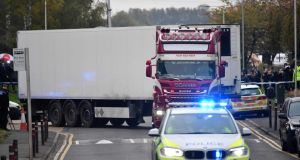 Police had originally reported that the truck had arrived in Britain last Saturday via Holyhead. Photograph: Ben Stansall/AFP/Getty

A truck pulling a trailer in which British police found the bodies of 39 people was registered in Bulgaria by a company owned by an Irish woman, Bulgaria’s foreign ministry said in a statement on Wednesday.

British police said they believed the trailer found in Essex in the early hours of Wednesday containing the bodies of 38 adults and one teenager had been shipped from Zeebrugge, Belgium, into the port of Purfleet in eastern England and docked in the Thurrock area.

Police had originally reported that the truck, which ended up at an industrial site in Grays, Essex, about 30km east of central London, had arrived in Britain last Saturday via Holyhead in Wales.

While Essex Police did not mention Ireland in its early statements, Holyhead only services ferries that depart Irish ports.

However, it has now been confirmed while the truck travelled from Northern Ireland the container, with the victims inside, was never in Ireland.

The red cab unit of the truck was believed to have originated in Ireland. It had “Ireland” emblazoned on the windscreen.

The Department of Justice and Equality said they are aware of the “tragic reports” from England, but added that the container did not pass through Ireland.

“Police inquiries in the UK have identified that the container did not pass through Ireland (as per the statement issued by Essex Police),” a spokesman said.

“It is understood that the container was collected in the United Kingdom by a truck cab which had come from Ireland.

“Garda Siochana and the Irish authorities remain willing to assist in any further investigations in regard to the matter.”

Earlier on Wednesday afternoon, Essex police said: “Originally, we reported that the lorry had travelled into the country through Holyhead on Saturday, October 19th.”

“After further enquiries, we now believe that the trailer travelled from Zeebrugge into Purfleet, and docked in the Thurrock area shortly after 12:30am this morning.

“The tractor unit of the lorry is believed to have originated in Northern Ireland. We believe the lorry and trailer left the port (of Purfleet) shortly after 1.05am.

“The driver of the lorry, a 25-year-old man from Northern Ireland, remains in custody having been arrested on suspicion of murder.”

The truck, which still contained the victims, was later driven away to a secure location at nearby Tilbury Docks so the bodies could be recovered.

The arrested man is from a village in Co Armagh close to Portadown and has worked as a truck driver for a number of years.

I’m appalled by this tragic incident in Essex. I am receiving regular updates and the Home Office will work closely with Essex Police as we establish exactly what has happened. My thoughts are with all those who lost their lives & their loved ones.

The Bulgarian Embassy in London received information about the truck registration from British police, the ministry said in a statement.

“The Scania truck was registered in the city of Varna under the name of a company owned by an Irish citizen,” the ministry said.

Bulgarian public broadcaster BNR, citing unnamed sources, said the truck, which has been registered in Bulgaria on June 19th, 2017, had left the Balkan country the next day and has not returned since.

The Bulgarian prime minister Boyko Borissov also said that the truck has not entered the country since 2017 and that Bulgaria has no connection with the deaths in Britain apart from the truck’s registration.

The industrial estate is by the River Thames, about 30km from central London.

Police have not yet established the identities or nationalities of the deceased. Early indications suggest there are 38 adults and one teenager, police said.

Deputy Chief Constable Pippa Mills said the discovery of 39 bodies in a lorry container in Essex was an “absolute tragedy” and appealed to anyone with any information to contact police.

Taoiseach Leo Varadkar had early on Wednesday told the Dáil the Government will carry out any necessary investigations if it is established that the container passed through Ireland, which has now been ruled out by Essex Police.

He pointed out that the information they had so far is “very sketchy but there are some reports that the truck may have passed through Ireland at so some point.

Police officers in forensic suits are examining the large white container on a red truck next to warehouses at the site. Police sealed off the surrounding area of the industrial estate with large green barriers.

Aerial footage from the scene shows forensic officers walking in and out of the lorry which is parked on Eastern Avenue opposite Pirtek and Hydraquip. Two tents have been erected – one in front of the lorry and one behind it with police vehicles on either side.

Chief Supt Andrew Mariner said: “This is a tragic incident where a large number of people have lost their lives. Our enquiries are ongoing to establish what has happened.

“We are in the process of identifying the victims, however I anticipate that this could be a lengthy process.

“We believe the lorry is from Bulgaria and entered the country at Holyhead on Saturday 19 October and we are working closely with our partners to investigate.

“We have arrested the lorry driver in connection with the incident who remains in police custody as our enquiries continue.

“I appreciate this cordon is going to disrupt the activity of local businesses in the area and we will work to ensure that disruption is kept as short as possible.

“We are working with Thurrock Council to mitigate against any impact our investigation scene will have locally.”

Although it is thought the lorry may have entered Holyhead via Dublin, Seamus Leheny, Northern Ireland policy manager with the Freight Transport Association, said there were a lot of unanswered questions.

“I understand it was a Bulgarian-registered container and the driver was from Northern Ireland, but there are a lot of things we need to find out.

“There could have been two to three drivers involved. We just don’t know yet, and we don’t have the history of its movement.”

British prime minister Boris Johnson has said he is “appalled” and that his thoughts are with those who lost their lives.

“I’m appalled by this tragic incident in Essex,” Mr Johnson said. “I am receiving regular updates from the Home Office and will work closely with Essex Police as we establish exactly what has happened,” he said. “My thoughts are with all those who lost their lives & their loved ones.”

In a statement, Home Secretary Priti Patel said: “I’m shocked and saddened by this utterly tragic incident in Grays. My heart goes out to all those affected.

“Essex Police has arrested an individual and we must give them the space to conduct their investigations. Home Office immigration officials will be working closely alongside them to establish how this horrific event came to happen.”

“People who are forced to take dangerous and sometimes fatal passages to reach the UK often do so because current immigration policies and practices deny them safe and legal options.

“As the police investigation continues, our thoughts remain with the families and friends of those affected by this awful tragedy.”

People who work on the industrial estate spoke of their shock. Dan Peters, managing director of Pirtek, a hydraulic maintenance company, said: “We’re not able to gain access to our units to open up for daily business. Obviously, it’s terrible news.”

Mr Peters said the industrial estate is made up of courier and logistics companies.

In 2000, British customs officials found the bodies of 58 Chinese people crammed into a tomato truck at the port of Dover. Seven men were jailed by a Dutch court for their role in the human-smuggling operation and the Dutch lorry driver was jailed for 14 years. – Additional reporting: PA/Reuters